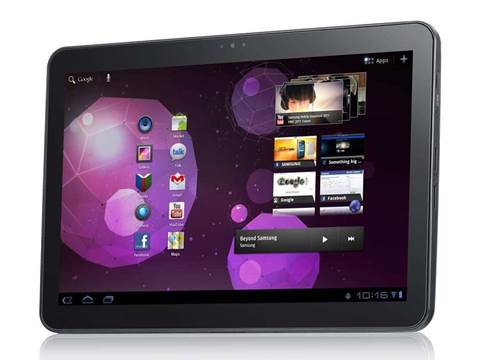 Sales of Samsung's anticipated Galaxy 10.1 tablet device could be delayed by a month in Australia after the Federal Court granted an injunction preventing the product's release following allegations the device infringed on up to 10 Apple design patents.

Justice Annabelle Bennett said Samsung would be blocked from importing, advertising, selling or authorising the use of its Galaxy Tab 10.1 tablet in Australia.

Samsung would also be required to supply Apple with three early samples of the version of the Galaxy tablet intended for sale locally.

The South Korean vendor's legal counsel argued the Australian product was different from the US sample Apple has used to mount its case on patent infringement.

The order was the first significant move in a expanding global patent infringement case that has launched in the US, Germany, South Korea and Japan.

Apple initially filed suit against Samsung in the US District Court of Northern California in April, arguing the tablet maker had "slavishly copied" its designs in 15 devices, including the Galaxy Tab 10.1.

The Federal Court of Australia heard for the first time this week allegations that Samsung had infringed on 10 of Apple's patents that were registered between 2005 and 2007.

The patents included the use of an image to denote a direction for unlocking the device via touch screen, and the use of a bouncing animation when dragging images or text to the edge of the touch screen.

Documents filed to the US District Court showed that case similarly covered graphical user interface elements, the design of the hardware and the use of one and two-finger gestures on the touch screen.

"The concerns of Apple extend beyond matters of appearance and go to matters of function for the particular device," Apple's legal counsel Christian Dimitriadis told the Federal Court of Australia.

Calling the Galaxy Tab 10.1 a "copycat tablet", Dimitriadis indicated Apple had limited the number of patents it alleged Samsung had infringed to four during the interlocutory relief stage of the Australian case.

Samsung's lead barrister Neil Murray said the company was not sure which of the total 10 patents were covered.

Murray indicated he would argue some of the patents brought forward by Apple were invalid in Australia.

The injunction on the sale of the Galaxy tablet could not be lifted without license from Apple and likely wouldn't be lifted until after a directions hearing set for August 29.

Initial dates for Australian sales of the tablet had been set to precede the launch of HP's competing device, the TouchPad.

"At the moment the proceedings are in limbo - we don't normally leave cases in limbo," Justice Bennett said.

She congratulated the parties on agreeing to the proposition of injunction and delivery of early samples, nutted out behind closed doors during the court case on Monday.

Where this is going

An Apple spokesperson told iTnews that it would continue to protect its design patents.

"It's no coincidence that Samsung's latest products look a lot like the iPhone and iPad, from the shape of the hardware to the user interface and even the packaging," they said.

"This kind of blatant copying is wrong, and we need to protect Apple's intellectual property when companies steal our ideas."

Apple's initial case in the US District Court in April had since spurred countersuits from Samsung, launched in Japan, South Korea and Germany similarly for patent infringement.

It had also led to Samsung to demand in the US District Court samples of Apple's successors to the iPhone 4 and iPad 2 ahead of public viewing to prevent similar infringements of patents or trade dress.

That request was denied last month.

The worldwide case was thought to have damaged the two companies' relationship, vital to the supply of key components of Apple hardware.

Apple has been rumoured to sever ties with Samsung for chip manufacturing and potentially NAND flash storage, both of which are used heavily in the iPad and iPad 2 devices.