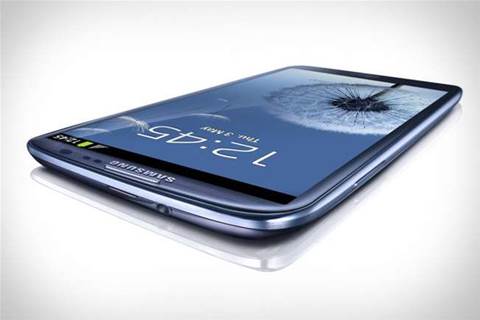 Just two weeks after claiming a $US1.05 billion court victory over Samsung, Apple filed a new claim with the U.S. District Court of Northern California, this time firing off infringement accusations at some of its rival's newest smartphones and tablets, including the Samsung Galaxy S III and Galaxy Note.

Appleu filed an amended patent infringement complaint accusing 21 Samsung mobile devices of infringing on its designs for the iPad and iPhone. All devices targeted in the new claim were launched after August 2011, or after Apple's original claim for the U.S. trial that ended in its favour two weeks ago.

"Since then [April 2011], Samsung has continued to release new infringing products, including its current flagship device, the Galaxy S III," Apple wrote in the new claim.

In addition to the Galaxy S III, Samsung's most recent Android-based smartphone that launched in June, Apple is claiming that Samsung's Galaxy Note and new Galaxy Note 10.1 tablet also infringe on its patents.

Unlike the 28 Samsung devices that were targeted by Apple during the first U.S. case, the new list of smartphones and tablets being called into question allegedly infringe on Apple's patents related to the iPhone and iPad user experience, rather than their physical look and feel. The iPhone and iPad patents being examined in the new claim include those for features such as slide-to-unlock, word recommendation and search. A total of eight patents were included in the new claim.

Samsung refuted Apple's claim this weekend, saying its rival was attempting to stifle consumer choice in the mobile market.

"Apple continues to resort to litigation over market competition in an effort to limit consumer choice," Samsung said in a statement to the Associated Press. "We will continue to take the necessary legal measures to ensure the availability of our innovative products in the United States."

Should Apple successfully prove it has suffered irreparable harm as a result of the Galaxy Note or Galaxy S III, a preliminary injunction preventing U.S. sales of these devices could be put into place. Samsung has sold nearly 10 million Galaxy S III smartphones since its launch earlier this year, a figure that has propelled the South Korean tech giant to the top seat in the global smartphone market, where it currently holds 36.5 percent of the global market, according to IDC.

Apple is separately seeking a permanent ban on eight Samsung smartphones and the cellular version of its Galaxy Tab 10.1 device following its victory in the first court hearing. These devices are mostly older Samsung models, however, including its first and second-generation Galaxy smartphones.