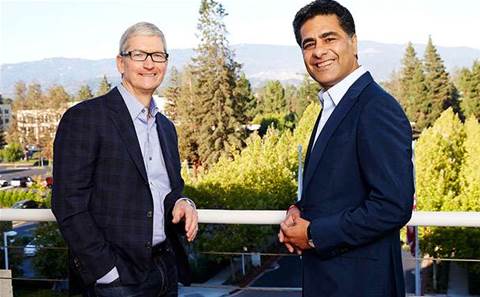 More than 5,000 Deloitte advisers will be included in the Apple initiative, the companies said. The consulting firm also launched EnterpriseNext, a program aimed at helping clients make better use of Apple products and services.

Apple has announced a steady stream of enterprise partnerships in recent years as it aims to draw more revenue from a market that some say it has traditionally overlooked.

A partnership struck with IBM in 2014 signalled Apple's intentions of getting more serious about corporate clients, or enterprise, and deals with Cisco and SAP have followed.

The deal with Deloitte will ensure that Apple is top of mind as companies think strategically about their practices, Apple CEO Tim Cook said in an interview.

"What's needed now is more of a focus on transforming the enterprise and helping businesses identify which areas have the highest either return on investment or highest impact on customer satisfaction," Cook said. "Deloitte is well positioned for this."

As part of the EnterpriseNext program, customers can meet with designers and engineers who specialise in Apple's operating system.

"The intent there is to, in one location, bring the best engineers, the best products and the best thinkers to try and address clients' problems," Punit Renjen, CEO of Deloitte Global, said in an interview.

Apple faces mounting pressure to find new streams of revenue after sales of the iPhone, which drives more than half of its revenue, declined for the first time this year.

The tech giant appears to have concluded that the quickest way to progress in enterprise is to partner with companies rooted in the space, said analyst Jan Dawson of Jackdaw Research.

Cook said in 2015 that Apple's enterprise business had reached US$25 billion in annual revenue. He declined to provide a new figure on Wednesday but stressed the company is gaining ground.

"The momentum is significant, and we see this as a very important growth vector," he said.