Apple turns down an actual genius for Genius Bar job 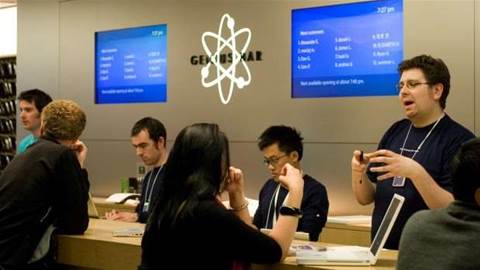 If you've ever been to an Apple retail store, you'll have seen the blue-shirted “Geniuses” Apple hires to offer technical support and customer services. I don't put the quotation marks there pejoratively – that's actually what the company insists you refer to them as. So it's something of an irony that Apple missed out on the opportunity to hire one of its company's actual geniuses to man the Genius Bar.

JK Scheinberg is famous in Apple history for managing to get Mac OS running on Intel computers. He retired from the company in 2008, but apparently sought work as a Genius in an Apple store as a hobby to keep him busy. As The New York Times reports in a piece on ageism, however, he was overlooked.

“A little restless after retiring in 2008, at 54, he figured he'd be a great fit for a position at an Apple Store Genius Bar, despite being twice as old as anyone else at the group interview. “On the way out, all three of the interviewers singled me out and said, 'We'll be in touch,' ” he said. “I never heard back.”

Of course, The New York Times' inference that he was the subject of age discrimination could be completely wrong. He is more than a little overqualified, and being a good engineer doesn't necessarily make you suited for dealing with less tech-savvy members of the general public on a daily basis.

Wonder if Apple will finally give me callback on that genius bar interview https://t.co/9fXt5fBFTU #ageism

Nonetheless, you'd be hard pushed to think of anyone with a better knowledge of the working of Apple products outside of the company. JK's wife, Kim, explained the whole story of how Mac OS came to work on Intel chips thanks to her husband in an answer on Quora. Scheinberg had successfully got Mac OS working on a handful of Intel computers and demonstrated on three PCs at Apple's HQ:

“In JK's office, Joe watches in amazement as JK boots up an Intel PC and up on the screen comes the familiar 'Welcome to Macintosh'.

Joe pauses, silent for a moment, then says, "I'll be right back."

He comes back a few minutes later with Bertrand Serlet.

Max (our 1-year-old) and I were in the office when this happened because I was picking JK up from work. Bertrand walks in, watches the PC boot up, and says to JK, "How long would it take you to get this running on a (Sony) Vaio?" JK replies, "Not long" and Bertrand says, "Two weeks? Three?"

Bertrand tells JK to go to Fry's (the famous West Coast computer chain) and buy the top of the line, most expensive Vaio they have. So off JK, Max and I go to Frys. We return to Apple less than an hour later. By 7:30 that evening, the Vaio is running the Mac OS. [My husband disputes my memory of this and says that Matt Watson bought the Vaio. Maybe Matt will chime in.]

The next morning, Steve Jobs is on a plane to Japan to meet with the President of Sony.”

You can read the full story at Quora, but suffice it to say Apple has missed its chance to hire a bona fide genius to join its Geniuses.