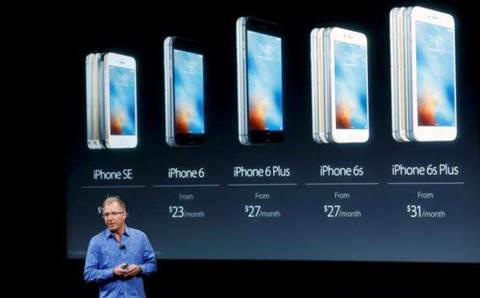 Apple on Monday unveiled a smaller, cheaper iPhone aimed at new buyers, especially in emerging markets and China, as the technology company looks to reverse a decline in worldwide sales of its most important product.

The new device, called the iPhone SE, has a 4-inch screen and starts at A$679 for the 16GB model. It represents Apple's second bid for the crowded mid-tier market after an unsuccessful foray three years ago.

The A$679 (US$399) starting price is well below the A$929 for the entry-level iPhone 6. The new phone, with Apple's vaunted A9 chip, is much faster than Apple's previous attempt at an entry-level phone, launched in 2013. It also runs Apple Pay and comes in the wildly popular rose gold color.

Analysts had said before the event that a phone priced below US$450 could be competitive with other mid-tier rivals, mostly running Google's Android system, and make an impact in emerging markets and China, the world's biggest buyer of smartphones.

Apple is hoping the cheaper model will stimulate overall iPhone sales, which it expects to decline this quarter for the first time since it essentially created the smartphone market nine years ago.

"There are people who want that smaller screen size," said Bob O'Donnell of TECHnalysis Research, but he warned that it may not be a sure-fire hit.

"It's a more attractive price point, but I don't think it moves the needle in emerging markets," he said. "You do a price cut when you need to drive the market a bit more."

The company showed off new wristbands for the Apple Watch and a new iPad Pro tablet at Monday's event.

The more compact phone design comes after it expanded the size of the screens in its high-end iPhone 6 and iPhone 6 Plus phones in 2014 to as large as 5.5 inches. That was broadly seen as an attempt to match rival Samsung Electronics with its large-screen Galaxy phones.

Before the launch at Apple's Cupertino, California headquarters, chief executive Tim Cook defended the company's refusal to comply with a US court order to unlock an iPhone belonging to one of the shooters in a December attack in San Bernardino, California.

Apple has a responsibility to protect customers' data and privacy, Cook said, adding that Apple "will not shrink from that responsibility." His statement was greeted by applause from the audience.

The tech company's dispute with the US government has become a lightning rod for a broader debate on data privacy in the United States. The company is set to square off against the US government at a court hearing on Tuesday, likely the first round in a long legal fight to avoid being forced to decrypt the iPhone.

Apple shares fell in the afternoon and were down about US$0.15 at US$105.77. The stock is down 20 percent from its all-time high closing price of US$133 in February 2015, as Wall Street worries that the company does not have any blockbuster products in the pipeline.

Eliminating departmental friction within MSPs
By Reuters Staff
Mar 22 2016
6:53AM