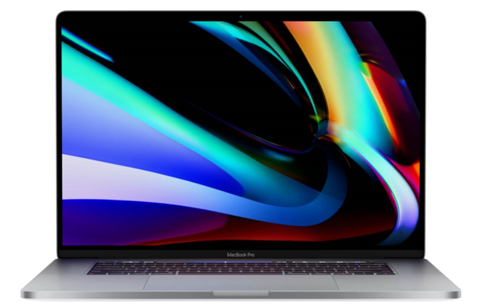 Apple is going bigger with the latest addition to its MacBook Pro lineup, unveiled Wednesday.

There's a larger display with the newest model, along with a bigger battery and expanded RAM and storage as well.

Crucially, Apple has also changed up its keyboard design, following an uproar from users and several lawsuits over the troubled "butterfly" keyboard design on the MacBook Pro.

What follows are five key things to know about Apple's latest MacBook Pro.

The new MacBook Pro features a 16-inch screen with Apple's vibrant Retina display technology, making it the largest Retina notebook display to date. That's an increase from the 15.4-inch MacBook Pro, which is being discontinued with the launch of the 16-inch model.

The 16-inch MacBook Pro display offers resolution of 3072 x 1920 (226 pixels per inch) with up to 500 nits of brightness and True Tone technology for improved colors.

Apple is debuting what it's calling a new "Magic Keyboard" as part of the 16-inch MacBook Pro. The keyboard uses a scissor mechanism, presumably an attempt by Apple to eliminate the issues tied to the controversial butterfly design.

The Magic Keyboard offers 1 mm of key travel for improved typing comfort and a "stable feel." (A report from The Verge says the keyboard is noticeably improved.)

The keyboard also features a physical escape key, answering another complaint about past models, alongside the Touch Bar touch-sensitive strip.

The new MacBook Pro offers ninth-generation Intel Core processors with six or eight cores, offering clock speeds of up to 5GHz. Performance on the notebook is up to 2.1 times faster than on the 15-inch MacBook Pro with a quad-core chip, Apple said.

Apple has also doubled the available memory for the 16-inch MacBook Pro, with the notebook configurable with up to 64 GB of RAM.

On graphics, users can see up to 80 percent faster performance (compared with previous high-end MacBook Pro configurations) thanks to the inclusion of AMD Radeon Pro 5000M series graphics.

The battery size is also getting a boost on the new MacBook Pro, with the notebook including a 100WHr battery (Apple says it's the largest battery yet in a Mac notebook). Battery life is only extended by one hour compared with previous models, however, with up to 11 hours of battery life promised for the 16-inch MacBook Pro.

Standard configurations of the new MacBook Pro will feature double the SSD of past models, Apple said, with up 512 GB or 1 TB of storage included. The 16-inch MacBook Pro can go up to 8 TB of storage, which is "the largest SSD ever in a notebook," Apple said.

On audio, the new MacBook Pro offers a "completely redesigned" six-speaker sound system. "New Apple-patented force-canceling woofers use dual opposed speaker drivers to reduce unwanted vibrations that distort sound," Apple said in its news release. "As a result, music sounds more clear and natural than ever before, and the bass can go half an octave deeper."

For a model configured with an eight-core Intel Core i9 chip, 1 TB of storage and 16 GB of RAM, the starting price is $2799.

Grabbing the hybrid cloud opportunity with Lenovo and Azure Services
By Kyle Alspach
Nov 14 2019
10:20AM