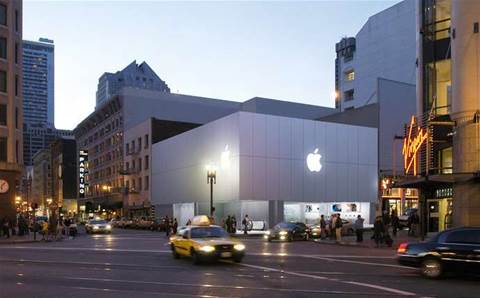 Apple unveiled a new vision for its hugely successful retail stores on Thursday US time, aiming to give shoppers the experience of setting foot in the headquarters of the company credited with inventing the smartphone.

Speaking at a media event in San Francisco on Thursday US time, Apple executives offered a sneak peak of a new store that features design elements that will later roll out to more locations worldwide, including new spaces for socialisation and collaboration.

The makeover follows Apple's first-ever decline in iPhone sales and its first revenue drop in 13 years in an increasingly saturated market.

While the redesign includes plenty of glass, metal and blonde wood – the sleek materials shoppers have come to associate with the company – it also borrows features from Apple's hotly anticipated new headquarters in Silicon Valley, which is set to open early next year.

Like the new campus, the San Francisco store features terrazzo floors, and the ceiling fixtures are also similar, BJ Siegel, Apple's senior director of design for real estate and development, said in an interview.

"We're trying to be one company and have one point of view," he said.

Shoppers who enter the "boardroom" at the San Francisco store, a new space for entrepreneurs and small business owners, will get an idea of the look of Apple’s futuristic headquarters, which is likened to a spaceship for its circular design. Much of the furniture is identical to that Apple employees will find in the new campus, including tables designed in part by Jonathan Ive, Apple’s chief design officer.

When working with small business customers, "we want them to feel like they have left the retail environment and entered Apple", Siegel said.

The Apple Store is the envy of many in the retail world, with the highest sales per square foot in the industry, but some say the stores have lost their edge since the first one opened 15 years ago.

With the new design, industry watchers are getting a glimpse of how Apple retail leader Angela Ahrendts, who joined the company two years ago from Burberry, will put her stamp on the store.

Other elements of the new floor plan include a redesigned section for accessories, an open space dubbed the "forum" for community events and a leafy plaza that will be open to the public round the clock.

"We will know we have done really great if it feels like a town square," Ahrendts said.

Cloud application revenue made easy
By Reuters Staff
May 20 2016
9:33AM