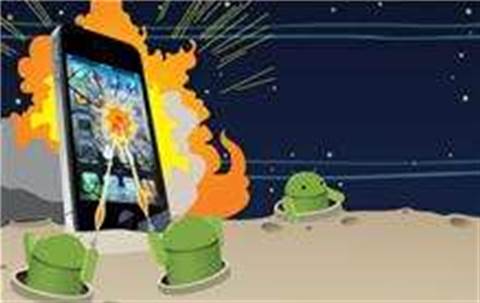 Google's Android OS has taken a dominant position in the smartphone market, achieving 52.5 per cent market share in sales to end users in the third quarter.

The OS doubled its share, up from 25.3 per cent in the third quarter of 2011, whilst Apple, RIM and Microsoft all saw their mobile operating systems lose ground, Gartner reported.

"Apple's iOS market share suffered from delayed purchases as consumers waited for the new iPhone. Continued pressure is impacting RIM's performance, and its smartphone share reached its lowest point so far in the US market, where it dropped to 10 per cent."

Google has been helped out by Samsung, which became the number one smartphone seller worldwide. The South Korean giant saw its sales to end users triple year-over-year to hit 24 million.

Apple may have lost ground, seeing a three million drop in iPhone sales from the second quarter, but analysts expect the iPhone 4S, 4 and 3GS to steal some market share back from Android.

Symbian continued its rapid decline losing over half of its market share, whilst Microsoft didn't fair much better despite major manufacturers signing license deals for Windows Phone 7. The Redmond giant's market share fell from 2.7 per cent to 1.5 per cent.

However, the release of the Nokia Lumia 800 and the strong marketing push surrounding the phone could boost Microsoft's position in the market.

Nokia remained the number one seller of mobile devices overall, although its market share declined again, from 28.2 per cent to 23.9 per cent year-over-year.

Overall smartphone sales to consumers hit 115 million in the third quarter, up 42 per cent from the same period last year. Mobile devices grew just 5.6 per cent, indicating the tipping point, where more users have smartphones than feature phones, is coming soon.