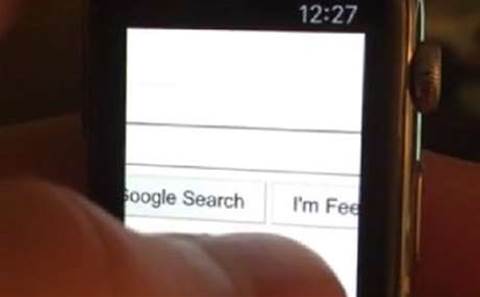 The Apple Watch can do a lot of neat tricks but the one thing it can’t do is offer internet browsing. Until now.

One developer has done the inevitable and tinkered with the Apple Watch OS to enable it to run a web browser.

In a video that appeared on 9 to 5 Mac it shows well-known jailbreaker, Comex, prodding around a Google homepage on the smartwatch.

With 38mm and 42mm display sizes there’s good reason why the Apple Watch doesn’t come with a Safari app and this video manages to reinforce that.

The webpage doesn’t fit to screen size and shows the user having to scroll a lot to see anything on the postage stamp sized viewing area. So don’t get too excited just yet.

However, despite its rather rudimentary delivery this will excite all the jailbreakers out there as it shows the Apple Watch can run external code giving developers a whole basket of opportunities.

Comex has not released any further details of the hack but an official SDK is on its way later this year so expect lots of new features to be heading to the wrist when that arrives.