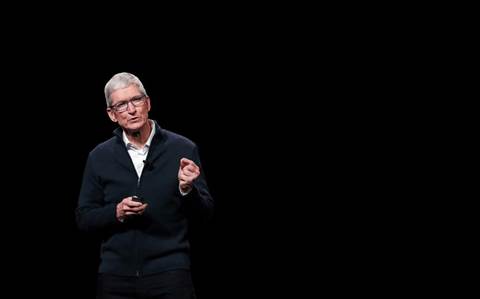 The company is expected to launch a low-cost version of its popular iPhone with 5G, a new version of the iPad Air and a high-end Mac Mini.

The company did not share more details on the event.

The new phone would be the first update to the iPhone SE model in two years and is rumored to come with an improved camera and a faster processor.

IPhones with 5G capabilities have been a big part of Apple's focus for its flagship product, with its latest model iPhone 13 showing off custom 5G antennas and radio components for faster speeds as customers look for powerful devices with better connectivity.

The world's most valuable company, Apple was able to overcome supply chain issues that crippled other industries and companies that led to product shortages during the holiday season to post record sales, thanks to the popularity of its iPhones.

Last year, Apple launched AirTags, a small tracking device, that has drawn criticism for unwanted tracking that could put users' privacy at risk.

Apple usually hosts three events every year to launch new products, starting in spring and announcing the launch of its latest iPhone range just before the holiday shopping season.

The tech giant also said it had paused all product sales in Russia in response to the Russian invasion of Ukraine.

"We are deeply concerned about the Russian invasion of Ukraine and stand with all of the people who are suffering as a result of the violence," Apple said in a statement. "We are supporting humanitarian efforts, providing aid for the unfolding refugee crisis, and doing all we can to support our teams in the region."

The company outlined a number of actions in response to the invasion, including stopping all exports into its sales channels in the country. Apple Pay and other services have been limited, the company said. The Russian state media, RT News and Sputnik News, are no longer available for download from the Apple Store outside Russia.

On Tuesday, users in Russia were still able to access Apple's online store but attempts to buy an iPhone showed that they were not available for delivery.

Grow your software revenue by selling these 5 affordable, essential tools for the modern workplace
By Staff Writer
Mar 4 2022
8:58AM