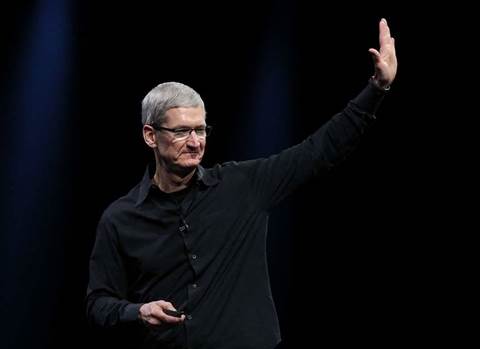 Apple used its sold-out Worldwide Developer Conference in San Francisco as a stage for unveiling a new line of MacBook Airs and a next-generation MacBook Pro that the mobile giant proclaimed to be the "most beautiful computer" it has designed to date.

As anticipated, the company also took the wraps off two new software updates: its new Mountain Lion OS, which will arm the refreshed MacBook line with a slew of new features including integration with iCloud, along with iOS 6, a revamped OS for the iPad and iPhone.

The new line of MacBook Airs consists of an 11-inch model and a 13-inch model that come equipped with Intel HD Graphics 4000 and 4 GB of RAM. The lower-end 11-inch model, which starts at $US999, comes with either 64 GB or 128 GB of flash storage and can reach clock speeds up to 1.7GHz with Intel’s third-generation i5 core processors.

Both the 11-inch and 13-inch MacBook Air are poised to counter this year’s new wave of Ivy Bridge-based ultrabooks, measuring a mere 0.68 inches thick and weighing in at 2.38 and 2.96 pounds, respectively.

"It's revolutionised the notebook. It's a breakthrough. Everyone is trying to copy it,” said Phil Schiller, senior vice president of product marketing at Apple said of the MacBook Air, reported by The Verge . "They find it's not so easy."

Apple also introduced a "next-generation" MacBook Pro that touts the same buzzed-about retina display delivered with the new iPad. A 2880-by-1800 resolution positions the new Pro, according to Apple, as the "highest-resolution notebook display" on the market.

It also has a whopping 768 GB of flash storage, boasts seven hours of battery life and is the thinnest MacBook Pro frame to date, measuring 0.71 inches and weighing 4.5 pounds.

The "next-generation" MacBook Pro, like the new 13- and 15-inch models and refreshed line of MacBook Airs, comes with Intel’s Thunderbolt technology and USB 3.0. It’s selling for $US2199.

Mountain Lion, iOS 6 in the pipeline

As speculated, Apple also unleashed its next-gen mobile OS iOS 6, along with the new Mountain Lion OS for Macs. The former, which was originally hinted at by the company in February, is the successor to Apple’s Lion OS.

And, just like its older sibling, the new OS is intended to deliver a user experience similar to that of the iPad, delivering iOS-like features such as Apple’s messaging service, the notification app and a gaming center.

Mountain Lion, which is projected to be widely available sometime next month, is also tightly integrated with Apple’s home-grown cloud service iCloud, which means users can synchronise apps such as mail, calendar and contacts across their Macs, iPads and iPhones.

"With Mountain Lion we built support for iCloud right in,” said Craig Federighi, senior vice president of software engineering at Apple. “When you sign in with your account, we configure all of your apps, and your content is up to date across devices."

A new feature called Power Nap is also available with Mountain Lion. Intended to keep your Mac up-to-date even while "asleep," the new capability refreshes thing like iCloud synchronisation and system software updates when idle.

Lastly, the new Mac OS plays host to a new steaming feature called AirPlay Mirroring, which can be used alongside Apple TV to wirelessly stream digital content including HD movies and TV shows from a Mac onto an HD TV.

Developers will get a "close to final" version of Mountain Lion at WWDC, Federighi said, before it officially becomes available in the app store next month for $US19.99.

The upgrade to Mountain Lion will be available to users currently running Snow Leopard and Lion, which Federighi said was the best-selling release in Cupertino history, with 40 percent of Mac users leveraging it today.

On the mobile software front, Apple gave WWDC attendees a taste of its next-gen operating system iOS 6. Through its delivery of nearly 200 new features, the platform is poised to create a new user experience on both the iPad and iPhone.

Siri, the voice-activated "personal assistant" that debuted with the iPhone 4S, appears to be smarter in iOS 6.

Not only will Siri make a debut on the iPad when iOS 6 officially drops this fall, but the popular assistant now "knows" more about movies, restaurants and sports stats through tighter integration with websites including OpenTable, Rotten Tomatoes and Yelp.

With iOS 6, Siri will also be able to launch apps on command, communicate in new languages including Italian and Korean, and post to Twitter and Facebook.

The new software platform will also arm iPads and iPhones with a new turn-by-turn GPS navigation feature and a new setting called "Do Not Disturb" that allows devices to retrieve messages and phone calls without lighting up or making a sound.

Apple said that iOS 6 is available for developers today and will support 3GS.

The WWDC event, which sold out in just two hours upon its announcement in April, will run through to June 15 in San Francisco. Apple said it will share the technical sessions from the event free-of-charge on its developer’s website for those who were unable to attend.

Eliminating departmental friction within MSPs
By Kristin Bent
Jun 12 2012
7:36AM