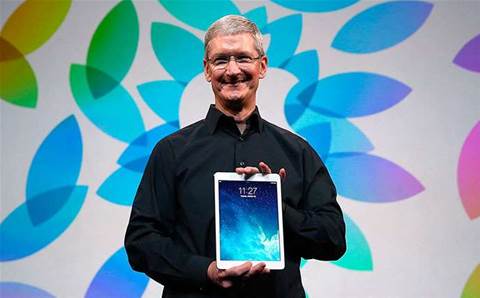 Apple's push into the enterprise is now worth US$25 billion.

That means the consumer electronics giant's enterprise business now represents more than 10 percent of the US$234 billion it reported for the 2015 year.

Cook said Apple was "making great strides in the enterprise market, announcing a new strategic partnership with Cisco in September while furthering our progress with IBM in building our mobility partners program".

"We estimate that enterprise markets accounted for about US$25 billion in annual Apple revenue in the last 12 months, up 40 percent over the prior year and they represent a major growth factor for the future."

To grow enterprise share, Cook said Apple would mostly lean on the "very large sales force" of partners such as Cisco and IBM, its "mobility partners", as well as the "huge worldwide indirect channel".

"I don't envision having a large direct sales force," he said.

Apple's deal with IBM is around apps, with IBM developing software for enterprise customers. The Cisco deal sees the two companies integrating their products and optimising apps with Cisco networks to "maximise the potential of iOS".

"I think we'll rub off on Apple," Robbins said. "[Apple CEO] Tim [Cook] came to our sales meeting, and he was on stage and saw the magnitude of this organisation being together, and I think he realised what we can do in the enterprise.

"I know Tim well enough to know that he will be looking to us to help them think about what is the go-to-market motion that we need to make this successful, and so I think that will certainly bring the partners into play," said Robbins.