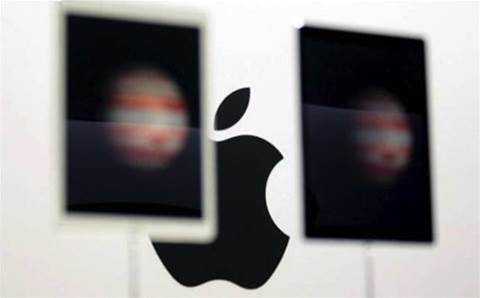 Apple has responded to a plateauing global smartphone market by launching ever-more expensive phones and diversifying into services. Chief executive Tim Cook credited "wearables", a category which includes wireless earphones and the Apple Watch, with making growing contributions as well.

And Apple has used its pile of cash to buttress share prices, buying back US$20 billion in stock in the quarter, part of a US$100 billion stock buyback programme.

"The lesson Apple’s management has learned from the iPhone X, is when you sell a smartphone for more than US$1000 you can sell fewer units and still reap the financial benefits," said analyst Thomas Forte from D.A. Davidson & Co.

Shares rose 3.4 percent to US$196.80 in after-hours trade. With a market capitalisation of more than US$900 billion, Apple is tickling at the title of world's first trillion-dollar company.

Apple sold 41.3 million iPhones in the fiscal third quarter, below expectations of 41.8 million units, but the average iPhone selling price hit US$724, beating analyst expectations of US$694, according to data from FactSet. Apple chief financial officer Luca Maestri told Reuters that customers were buying costlier models and the US$999 iPhone X was the quarter's best seller.

Apple posted third-quarter revenue of US$53.3 billion and profits of US$2.34 per share, compared with analyst estimates of US$52.3 billion and US$2.18 per share, respectively, according to Thomson Reuters I/B/E/S.

The world's most valuable technology company also forecast revenue of US$60 billion to US$62 billion for its fiscal fourth quarter, which will include early sales of soon-to-be-announced phone models, beating the US$59.6 billion analysts expected, according to data from Thomson Reuters I/B/E/S.

Despite the beat, James Cordwell, an analyst from Atlantic Equities, said the high selling prices might cause investors some concern because "there’s a limit to how much Apple can grow the iPhone franchise by pushing pricing."

But several of Apple's services do not face strong rivals. Maestri told Reuters that sales from Apple Care, the company's warranty offering, were up 27 percent versus a year ago, though the company did not disclose a dollar figure for sales.

Apple's biggest selling products do not yet face duties stemming from the US-China trade disputes, but US president Donald Trump has threatened hundreds of billions of further tariffs whose product categories have not yet been enumerated.

Apple is looking at whether it will be hit by tariffs on purchases the company must make, possibly "related to data centres," Cook said on a conference call with investors.

Another category potentially affected by tariffs is the Apple Watch, which is one of Apple's growth drivers. Maestri told Reuters that the company's so-called "wearables" business - which includes the Apple Watch and its AirPods headphones, among other items - has generated US$10 billion in sales in the past 10 quarters and saw sales increase 60 percent in the most recent quarter.

"We are not able to catch up to demand yet and continue to add capacity for the AirPods," Maestri said.

Apple's margins are facing pressure as it moves to put pricier components, such as OLED displays that show more vivid colours, into its products. The company said it expects gross margins of 38 percent to 38.5 percent in the fourth quarter, compared with analyst expectations of 38.3 percent, according to Thomson Reuters I/B/E/S. Analysts are also closely watching Apple's operating expenses, which have been increasing as its research and development costs outpace its revenue growth.

Services revenue was US$9.5 billion, beating analyst expectations of US$9.1 billion, according to Thomson Reuters I/B/E/S. The revenue included US$236 million from resolving lawsuits such as Apple's long-running dispute with Samsung Electronics.

Apple said it expects operating expenses of US$7.95 billion to US$8.05 billion in the fourth quarter, compared with analyst estimates of US$7.8 billion, according to Thomson Reuters I/B/E/S.

(Reporting by Stephen Nellis in San Francisco and Sonam Rai in Bengaluru; Editing by Peter Henderson and Lisa Shumaker)