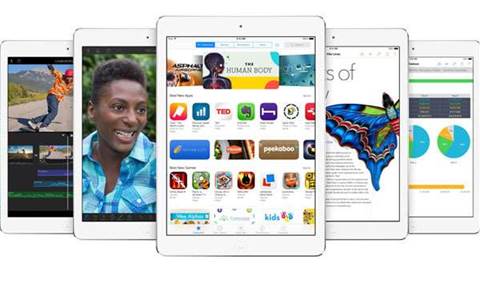 The new iPad takes design cues from the iPad Mini

Apple unveiled the latest version of the full-size iPad, saying it's thinner, lighter, and more powerful than its predecessor - earning it a new name, the iPad Air.

Head of marketing Phil Schiller said it was the "biggest step yet" for the iPad, hence the new name. The product has been years in the making, he said, to find ways to slim it down and make it thinner.

The bezel around the display is 43% thinner than the previous version, at 7.5mm thick compared to 9.3mm for the iPad 4. It weighs 454g, versus 635g for the iPad 4, which Apple said made the iPad Air the lightest full-sized tablet in the world.

Inside, it features the new 64-bit A7 chip - which arrived on the iPhone 5s - as well as the M7 motion coprocessor. That means it offers twice the performance of the previous generation, Schiller said.

Indeed, he said the CPU performance is eight times faster than the first iPad - and half of that jump has been via the iPad Air.

It also features faster Wi-Fi, and brings MIMO - multiple antennas - to an iOS device for the first time.

It still features a 5-megapixel iSight camera, with an improved front-facing camera, as well as dual microphones for the first time. Battery life will stay at ten hours.

It will come in silver/white and black/space grey colour schemes, and replace the existing top-line iPad for the same price.

The iPad 2 will be kept as a budget option for $449 for 16GB with Wi-Fi only, or $598 with mobile data. It ships November 1 in Australia and elsewhere, including China - with Apple putting it on the "wave one" sales list for the first time.