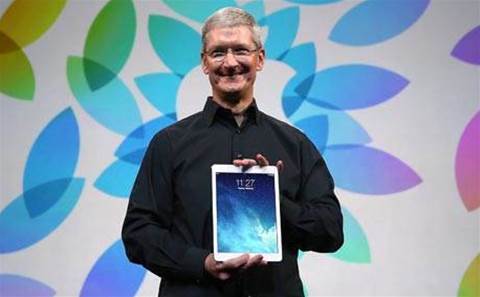 Mac sales remained strong, and iPad sales returned to growth during Apple's most recent quarter, helping to propel the company as buyers await a major iPhone launch this fall.

The Mac and iPad lines got a lift from a number of recent product introductions, and growth of the categories was a marked contrast to their sluggish performance throughout much of 2016.

The growth came thanks in part to product debuts at the company's Worldwide Developers Conference (WWDC) in June, which should "extend [Apple's] competitive lead this fall and well into the future," CEO Tim Cook said during the quarterly earnings call on Tuesday.

Mac sales reached US$5.59 billion in fiscal Q3, an increase of 7 percent from the same period a year ago when Mac accounted for US$5.23 billion in revenue. It was the third quarter in a row that Apple saw a year-over-year increase in Mac sales, following the release of an overhauled and pricier version of the MacBook Pro this past fall.

The quarterly sales included several weeks worth of sales of refreshed iMacs, which debuted in early June at WWDC. Apple updated the MacBook and 2016 MacBook Pro with Intel's latest Core processors in June as well.

"With the refresh of almost our entire Mac lineup in June, we're off to a great start for the back-to-school season," Cook said during the earnings call.

Apple reported that iPad sales came in at US$4.96 billion during the fiscal third quarter, up 2 percent from the US$4.87 billion generated by Apple's tablet line a year earlier.

The return to growth territory for iPad followed the introduction of a more-affordable version of the 9.7-inch iPad shortly before the start of the fiscal third quarter, along with the debut of a new 10.5-inch iPad Pro model at WWDC in June.

Sales of iPad were "especially strong in the US education market," Cook said during the earnings call. Sales to education customers climbed 32 percent year-over-year to 1 million units in fiscal Q3, Cook said.

Apple reported that iPhone saw modest growth of 3 percent during the fiscal third quarter, led by sales of iPhone 7. Revenue for the iPhone segment reached US$24.84 billion during the quarter, compared to US$24.04 billion a year earlier.

While Apple executives didn't share specifics on anticipated iPhone launches, the company offered strong guidance for the fiscal fourth quarter—suggesting that the debut of new iPhone models is on track for September. The company's fiscal Q4 typically includes a week or more of sales of newly introduced iPhone models. Some analysts had suggested that weak guidance for the quarter would point to delays in new iPhone introductions until October or later.

Instead, Apple offered revenue guidance of between US$49 billion and US$52 billion for the fiscal Q4, a significant sequential increase over the fiscal third quarter. Some reports suggest Apple is planning not only to release incremental iPhone 7S and iPhone 7S Plus models this fall, but also an iPhone 8 model with a slew of new premium features. Those could include a sizable OLED display, a minimal bezel around the screen and wireless charging capabilities.

Services were once again Apple's fastest-growing category in the most recent quarter. Revenue came in at US$7.26 billion during the company's fiscal Q3, a 22 percent jump from US$5.97 billion the year before.

During the earnings call, Cook declined to confirm a recent claim by President Donald Trump that Apple is planning to build three manufacturing plants in the US. After an analyst question about Trump's claim, Cook offered a lengthy explanation of what Apple is doing in terms of US job creation but did not address the president's assertion.