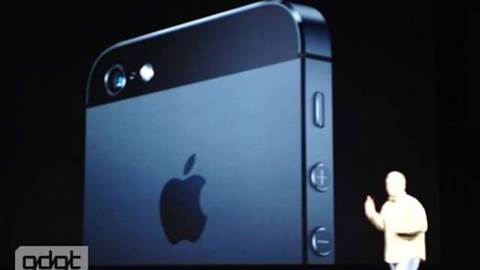 Apple today launched its sixth-generation iPhone in what CEO Tim Cook called a complete redesign of the market-leading smartphone.

The iPhone 5 is Apple’s thinnest smartphone yet, with its width trimmed down by 18 percent to 7.6mm, 20 percent lighter than its predecessor at 112 grams, and larger with a 4in screen over the iPhone 4s’ 3.5in display.

Long-running rumours about a possible new dock connector have been confirmed as Apple announced its 80 percent smaller 8-pin “Lightning” connector, ditching the previous 30-pin port. The company said it was working on an adaptor to convert the existing 30-pin capable accessories.

Significantly, and against expectations, Apple has confirmed the iPhone 5’s 4G capabilities will be compatible with local LTE networks, and will be offered by Telstra, Optus and Virgin Mobile.

Vodafone has also confirmed it will offer the smartphone, but not on a 4G network. The telco today announced the launch of its 3G+ network, with its 4G network to go online next year.

Apple has debuted a new processor in the smartphone, with the A6 chip 22 percent smaller in size but two times faster graphics and apps-wise than its A5 predecessor.

Apple also talked up the smartphone’s battery, claiming it offers 8 hours of 3G talk time, 3G and LTE browsing time, and 10 hours of browsing on wifi. It said the battery is capable of 10 hours of video playback and 40 hours of music playback, with a 225 hour standby time.

The smartphone’s 8MP camera has also been updated and slimmed down by 25 percent, which Apple said won’t affect its performance.

It is available for pre-order on September 14 from Apple and will start shipping to Australia on the 21st. The new iteration of Apple’s mobile operating system, iOS 6, will arrive on September 19.

"I think Time Magazine said it best 'it is the phone that has changed phones forever' and boy were they right,” CEO Tim Cook said at this morning’s launch.

"We started with that first iPhone, and each and every year we introduce new versions. Each time setting a new bar."