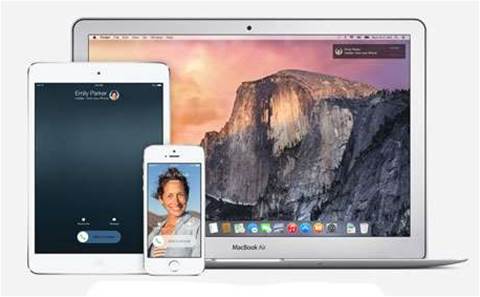 While all attention is on Apple's new iOS 8 this week, perhaps the vendor's most interesting move for business users is on the desktop.

Apple announced that Mac OS X Yosemite will offer the ability for users to add their phone number on their Mac for text messages and phone calls.

It's one of the most interesting new features from Apple, especially for the enterprise, said Foad Fadaghi, managing director of research firm Telsyte.

"That in effect is unified communications," Fadaghi said. "[It's] what many vendors have been trying to sell for many years – the likes of Cisco and other enterprise vendors. They've been selling this concept of a soft phone – the ability to make and receive calls on your PC. This builds it natively into your Mac."

According to Apple's website, it will be possible to read and send SMS and MMS messages on a Mac with Yosemite, as well as voice calls.

When a call comes in, as well as the iPhone ringing, the Mac will display a notification showing the caller's name and number. Users can also click a phone number in their contacts, calendar or messages, or in Safari to make a call.

The Mac and iPhone have to be on the same wi-fi network.

Riggs argued UC solutions from the likes of Avaya, Cisco and others are "more robust" with more advanced capabilities than what Apple will offer in OS X.

"Unless Apple comes out with a formal UC solution tailored specifically to businesses it simply won’t be a player in the market," he told CRN.

However he said the new feature will "challenge" CIOs and IT departments using traditional UC solutions.

"There is a massive number of iPhones and increasing number of Macs used in the workplace. Apple isn’t just extending iPhone’s voice and texting services to Macs, it’s baking them directly into the OS," Riggs said.

He said this could appeal to employees, and could mean they use Apple's system more, rather than their company system.

"This will be problematic for CIOs and IT departments that have invested heavily in UC solutions and start seeing employees’ utilisation of them drop off in favor of this Yosemite-driven communications experience."