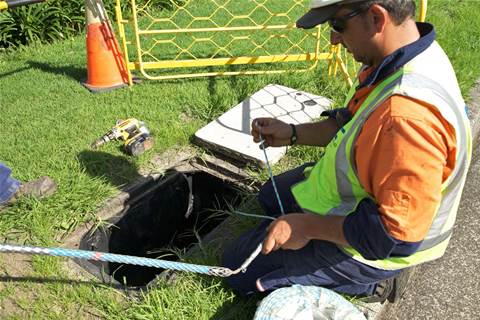 ISPs Telstra, Internode and iiNet have furnished small numbers of existing customers in the NSW regional town of Armidale with the first NBN fibre connections on the mainland - and at least 200 GB of quota to play with.

The service providers represented three-quarters of those participating in a "limited trial phase" for the mainland NBN, running "preliminary tests" involving a "limited number" of existing customers.

A Telstra spokesman said that it had a "handful" of existing customers connected in the Armidale first release site.

"We expect this to increase to around 40 once the trial is in full swing," the spokesman said.

"We'll also be testing how products such as the T-Box and T-Hub operate over the NBN."

An iiNet spokesman told iTnews that it had "two trial customers on 100 Mbps speeds on a Terabyte plan."

The spokesman said the two customers were "previously [only] able to get 1.5Mbps" connections to the internet.

Internode managing director Simon Hackett told iTnews that a "small number of customers had been switched on for testing purposes" in Armidale, some of whom attended today's launch.

"During the mainland trial phase, we will be offering existing ADSL customers a free NBN connection alongside their paid ADSL connection," Hackett said.

"It will be at 100 Megabits [a second] and with a 200 GB quota, to provide a good sense of the practical potential of the NBN."

Hackett said the trial period would run "until NBN Co have completed their wholesale access agreements, set up their billing ... systems, and sorted out migration and related processes."

"After the formal launch, we will be offering trial access to the NBN to all customers of Internode in all First Release sites as soon as NBN Co allow us to do so."

ISP iPrimus was also contacted for comment for this story but a representative could not be reached at the time of publication.

Telstra, Internode, iiNet and iPrimus were just the first four service providers to complete the on-boarding process to provide services on the NBN.

A second round of ISPs and wholesale aggregators was expected to join the first four once the NBN first release sites were ready to support full commercial broadband services later this year.

Prime Minister Julia Gillard "officially" switched on services in Armidale today, although the first trial users had been live for about a month.

"This test phase is a critical step in building the network, working with telecommunications providers and integrating our operating systems as we aim to provide the best possible service throughout the future rollout," an NBN Co spokesman said in a statement.

The Armidale first release site covered 4,882 premises - or 2,900 without counting the University of New England.

Remember to sign up to our new Telecommunications bulletin to stay connected with a concise online wrap of Australia’s telecommunications and ISP industry.
Got a news tip for our journalists? Share it with us anonymously here.

Grabbing the hybrid cloud opportunity with Lenovo and Azure Services
By Ry Crozier
May 18 2011
3:07PM