Aussie firm to roll out Apple iBeacon in 45 shopping centres 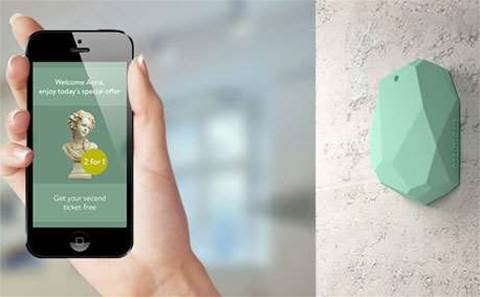 An Australian firm is rolling out signal transmitters to 45 shopping centres that will trigger special offers on shoppers' phones.

The system is being rolled out by DC4G, a local "proximity marketing" specialist which is using technology from US company Estimote.  The company has announced the sensors will be installed in 45 shopping centres where it operates free Wi-Fi services, the first being Mt Ommaney Shopping Centre in Queensland.

The sensors are small dome shaped devices about the size of two 50 cent pieces. Shoppers download a pass to their phone and special offers are triggered when shoppers are near the sensors. The offers appear as notifications on the phone screen.

The system relies on Apple's iBeacon system. This transmits via Bluetooth low energy which transmits 2.4GHz signals up to 200 feet away, according to the Estimote web site.

While the system is being used to advertise offers like a two-for-one bacon and eggs offer at Shingle Inn restaurant, DC4G is looking to expand its use beyond consumer retail. DC4G COO Robert Ablinger said the company is in negotiations with an airline to implement iBeacon for boarding passes.