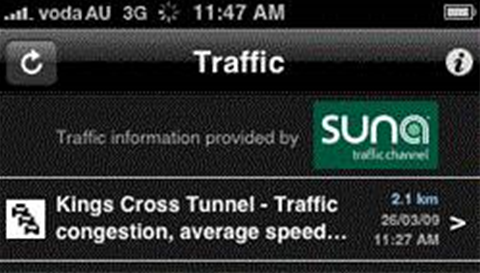 One of the bigger stumbling blocks for Apple's phenomenally popular iPhone has been the lack of GPS mapping solutions beyond the inbuilt Google Maps.

The early SDK for the iPhone forbade the development of "real time route guidance" software, something that's apparently about to reverse when the iPhone 3.0 firmware upgrade rolls around.

In the meantime, though, there's still some innovation around the edges of what you might call real-time route guidance, with Intellimatics Australia using its SUNA traffic database to deliver traffic information to Australian users.

Unlike the SUNA car-based GPS solution (currently available in Melbourne, Sydney, Brisbane and South-East Queensland), which relies on a SUNA-compatible antennae, the iPhone application gets its data over the 3G or WiFi network of your choice.

It's available in the App store now under the name "Traffic Australia" for $3.99, which buys you a year's subscription.