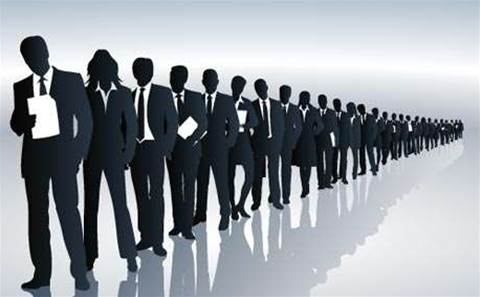 Australian IT graduates are in a battle for post-university jobs with migrans and outsourcing firms, leaving a third of recent IT grads looking for full-time work four months after completing their degree.

According to the Grattan Institute's Mapping Australian higher education 2016 report [pdf], rising demand from employers for people with IT skills has not been met with a similar level of job appointments for local graduates.

The report found university IT graduates don't have what the market wants, meaning IT jobs are being filled by skilled migrants, outsourcers and those with vocational qualifications.

"Unlike in science, there is no shortage of jobs directly related to IT relative to the number of graduates," the report found.

"But weaknesses in IT university education, and strong competition from a globalised IT labour force, mean that IT graduates do not easily find full-time work."

Despite growth in available jobs - monthly vacancies are much higher for IT than other fields in the STEM category, the report found - the proportion of recent IT grads with a full-time job is at its lowest since 1982.

"In 2015, just 67 per cent of recent graduates in computer science who were looking for full-time employment had found it, slightly below the level of all graduates," the report found.

"In 2014, of those IT graduates who had found full-time employment, only 64 per cent were in jobs matched to their qualification."

Skilled migrants and outsourcing firms represent a huge problem for Australian IT grads, according to the report.

Workers with overseas IT qualifications made up 30 percent of the employed IT professional market last year, compared to 20 percent of science workers and 23 percent of engineers.

The number of IT professionals on skilled 457 visas has grown to nearly 11,000 this year, the report found, compared to steady declines in the number of both science and engineering workers on 457s.

Throughout 2014-15, 19,600 IT workers migrated to Australia - six times the number of IT students completing Australian bachelor degrees in IT. Many of these migrants were software and application developers.

Imported IT services also represent a threat to local prospective IT workers, given the propensity of Australian employers to look overseas for cheaper, outsourced IT services and labour.

"Especially when the Australian dollar is high, the expense of in-house ICT services compared to cheaper alternatives overseas affects the way the ICT industry operates in Australia."

What's the root of the problem?

The report found employers aren't happy with the quality of IT jobseekers coming out of university.

Around 53 percent of employers wanting computer science graduates in 2014 said they couldn't find what they were looking for.

"IT graduate skills and attributes are mismatched with the labour market."

Are the universities to blame?

Australian IT students are unhappy with the development of their skills at university than those in any other discipline, the report found.

IT courses have a very high attrition rate, larger than any other field of education: just 63 percent of those who started an IT degree in 2005 had finished it by 2013. The completion rate for all undergraduates is 74 percent, according to the report.

"IT students are less satisfied with their skills development, and are more likely to leave their courses without finishing, than are other students," it states.

"IT industry and professional bodies suggest that university IT courses need improving."

Completion rates for IT students have been slightly on the rise since 2010, but it will take many more years to recover from a "deep and prolonged decline" that started in the early 2000s.

"In 2014, these enrolments reached their highest level since 2003. Applications and offers data from early 2016 suggest that the recovery is continuing," the report stated.

"Yet while trending upwards, IT has the smallest STEM applicant pool, attracting less than half the numbers of engineering, and less than a third of science."