Aussie 'net speeds 'peak' above 26 Mbps for the first time

The internet is getting faster.

The company's latest State of the Internet report (pdf) shows Australia's "peak" internet connection speed increased by 2.9 Mbps between the fourth quarter of 2012 and the first quarter of 2013, to 26.3 Mbps.

The "peak" speed number is an average of the "highest connection speed calculated from each unique IP address" that hits up an Akamai HTTP/S platform for web content.

Akamai positions the metric as being "more representative of internet connection capacity" than real-world user speeds, as top connection speeds are likely reached late at night and only when downloading large files. The metric covers only fixed-line users.

Aside from an anomaly between 2011 and 2012, the peak connection speed has been slowly increasing over time, according to past Akamai reports. 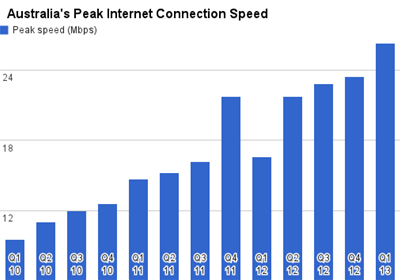 Average connection speeds are also up over time, but have been fairly stable over the past year.

The latest report pegs the average speed experienced by Australian fixed-line internet users at 4.7 Mbps. Three years ago, the average was closer to 2.5 Mbps. 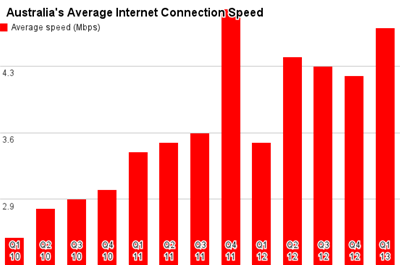 Further comment was being sought on Australia's results from an Akamai spokesperson at the time of publication.