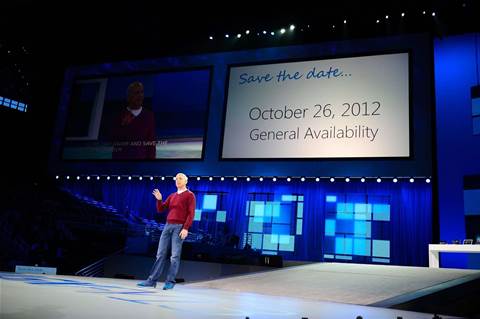 The Australian operations of global PC makers are gearing up to unleash their Windows 8 products on the local public, with at least one tech giant already taking pre-orders for its new devices.

Lenovo also confirmed it was taking pre-orders through its channel partners, and would open its website to orders on October 26.

Microsoft announced yesterday it was taking pre-orders for Windows 8, with a promotion price for an upgrade to the full version of the software at $US70 ($A68) for a DVD pack. The boxed edition of the Windows 8 Pro upgrade will jump to $US200 after the promotion - the same price as the Windows 7 Professional upgrade DVD.

From October 26 users can download the OS for $US40, a price that will expire at the end of January. The US arms of Acer, Asus, Dell, HP and Samsung also announced yesterday pre-orders had opened for machines running Windows 8.

Dell Australia confirmed to CRN its XPS 12, XPS One 27, Inspiron One 23 and XPS 13 would all be available for pre-order from October 23.

Fellow PC maker Asus said its Windows 8 products would be available for pre-order at the discretion of its retailers.

HP and Samsung did not respond to request for local availability by the time of publication.

Update 2:20pm: HP has confirmed its devices can now be pre-ordered from its resellers nationally. Pre-orders will also be made available through its online store in the coming days.