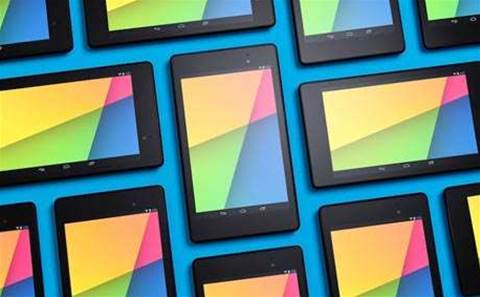 The tablet is also available for purchase online at Google’s Play Store with free shipping for a limited time.

So why would you choose a Nexus 7 over, say, an Apple iPad mini? The new Nexus 7 has a 1080p screen resolution, almost double the resolution of the Apple iPad Mini. While the 4G Nexus 7 sells for $439, the base model is $69 cheaper.

The new Nexus 7 is also “80% more powerful” than last years’ effort, according to Google's sales pitch, and is thinner and lighter.

It’s also the first tablet on the market that comes with Android 4.3 - this includes a handy feature for running the device to a limited use profile mode, where access to certain apps and settings are disabled. This could be handy for sharing around the office or when using the tablet as a Point-of-Sale device. It’s also handy for when you want to use the tablet for a single purpose, such as in a kiosk like mode where it only displays specific product information.

This article originally appeared on Bit.com.au