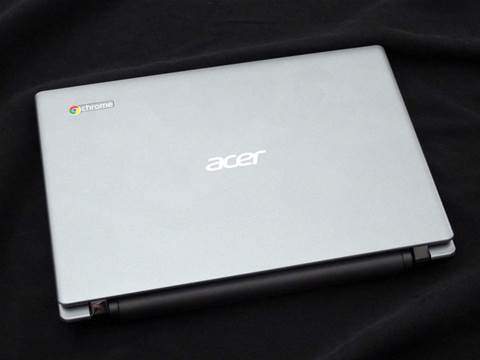 Google’s other operating system, ChromeOS, has finally made its way to Australia, with the official launch of Acer’s C7 and Samsung’s Chromebook. Priced at $299 and $349 respectively, these lightweight notebooks should go onsale sometime today, although at the time of writing they were still nowhere to be seen on retailer’s websites.

For those who aren’t up to date on ChromeOS, which has been out overseas for a few years but unavailable locally, it is a thin, browser based Linux variant that is designed to hook almost exclusively into Google services. This means that it relies heavily on web connectivity and the two models have varying levels of inbuilt storage – in Samsung’s case it is a minimal 16GB of flash, but the Acer C7 has a decent 320GB hard drive for those times when you lack a net connection.

We haven’t heard from Samsung in reference to its ARM-powered 11.6in model, but we have spent some time with Acer’s Celeron-based C7. The C7 comes in an 11.6in chassis, with a 1366 x 768 resolution LCD screen. It has 2GB of RAM to go alongside the dual core Celeron 847 CPU, and sports the aforementioned 320GB hard drive as well as a free year of 100GB Google Drive storage.

Given the heavy reliance on always being online, connectivity is surprisingly good for a cheap laptop. It has a dual band 802.11a/b/g/n WiFi chip as well as Gigabit Ethernet. There is also a HD camera for those Google Hangouts, three USB 2 ports, a SD/MMC card reader, HDMI and VGA. The only really baffling thing about the specification is the quoted battery life, a mere four hours.

The C7 is due to go onsale today from both Acer’s own acerstore.com.au website and selected JB Hi-Fi stores. Google’s website points people to JB HiFi and Harvey Norman for the Samsung Chromebook, but at the time of writing neither product were anywhere to be seen beyond Google’s website.