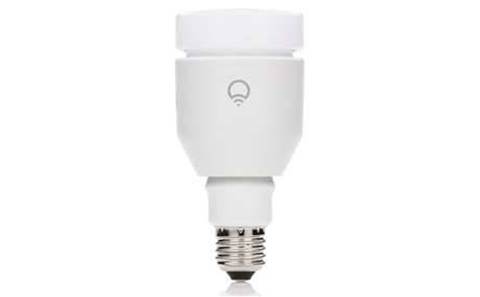 An Australian company has released a wi-fi enabled light bulb for public purchase, while announcing it has secured $12 million in backing from Silicon Valley venture capital firm Sequoia Capital.

"To date, the bulbs were only available to Kickstarter backers and select customers as the company scaled to meet the overwhelming demand," said a statement from LIFX.

Distributor Synnex is shipping the bulbs in Australia.

LIFX said the internet-connected LED bulb is self-contained and plugs into standard light sockets. The iOS and Android apps then allow the user to control "over 16 million colors, dimming, scenes, individual lights, groups of lights", as well as put on effects such as "music visualisation, candle flicker and lava light".

The lights also have an "open API platform so developers can freely develop apps and use cases to support the growing need for smart lighting throughout the world", according to the manufacturer.

"We're amazed at the level of response we've received since our initial launch on Kickstarter in 2012," said Phil Bosua, founder and chief executive of LIFX. "In the short time since the launch, we've worked to perfect our hardware, build a beautiful app and increase manufacturing to meet demand."

LIFX's statement also said that a fundraising round of $12 million has been completed, led by US firm Sequoia Capital.

A spokesperson for the manufacturer said that the backing makes LIFX the first "Australian company to receive funding from Sequoia, a premier Silicon Valley venture capital firm".

Omar Hamoui of Sequoia Capital said: "As consumers adopt connected home technologies, the LIFX bulb will be a starting point because it's easy to install and immediately useful on a daily basis."

Bosua said that the new funding "will allow us to accelerate the growth of LIFX and produce some of the world’s best internet of things products".

LIFX started with an office in Melbourne but has recently opened a branch in the San Francisco area, according to the company spokesperson. A 2012 Kickstarter campaign raised $1.2 million in six days for the privately owned firm and the first quarter of this year was spent delivering bulbs to the those pledge makers.