Aussies get 4G treatment for iPhone 5 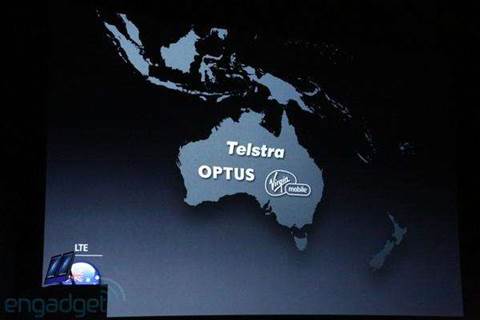 Apple’s iPhone 5 will touch down in Australia compatible with local 4G networks.

Prior to expectations, Apple announced this morning at the launch of its sixth-generation iPhone that the iPhone 5 will be available in Australia on the Telstra, Optus and Virgin Mobile 4G networks.

The announcement marks the first time an Apple LTE product has launched with local 4G compatibility.

Apple’s last product release, the new iPad or iPad 3, was marketed as having 4G capability, but the company was forced to stop promoting the tablet as 4G-capable in Australia after it was ruled as misleading, as the devices could not be used on Australian 4G networks.

The smartphone will retail in Australia from Apple for $799 for the 16GB model, $899 for 32GB and $999 for the 64GB model. Telstra, Optus and Virgin are yet to release pricing information.

The iPhone 5 comes in a two-tone design, and will be available in black and slate, and white and aluminium. It is available for pre-order on September 14 from Apple and will start shipping on the 21st.

The new iteration of Apple’s mobile operating system, iOS 6, will arrive on September 19.

Related: the full list of the iPhone 5's new specifications.