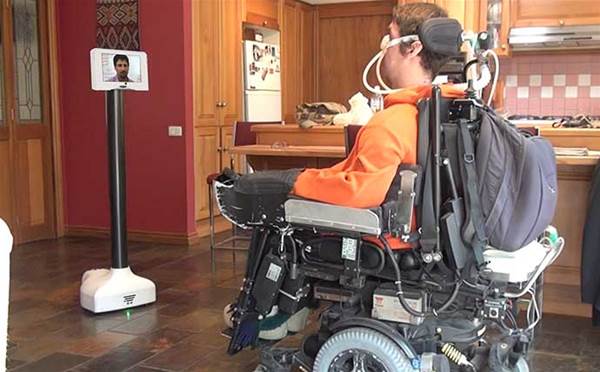 An Australian robotics company has won the hearts and minds of tech enthusiasts and health advocates across the country after it unveiled the world's first commercially available brain-controlled telepresence robot, Teleport, which allows people with physical disabilities to remotely attend work, events, meetings or school.

Developed by 2012 young Australian of the year Marita Cheng, with her company Aubot, Teleport uses an off-the-shelf brain control product called MindWave to control a video-enabled robot. The device moves in direct response to its users' focussed brainwaves.

The device started shipping in November and has found use in offices for telecommuting, companies with multiple offices, hospitals and museums.

The robot is 1.1m at its shortest point and reaches 1.7m at its highest point. It has ultrasonic sensors at its front and rear to prevent collisions, a wide-angle camera lens and is fitted with a touchscreen tablet. Teleport is priced at $3800.

Cheng said through Aubot, which develops robotic arms in addition to telepresence robots, she sought to ease the burden of interaction for people with disabilities.

"I want to bring technology to the world that makes things easier for people. Teleport saves on transportation time, saves on travel costs and allows people choice in where they look, who they talk to and where they explore remotely, when they can’t be there in person," she said.

"Our users say that the experience is 100 percent better and more immersive than they expected."

Cheng's company was last year recognised by Optus with a $50,000 grant as part of the telco's Optus Future Makers initiative. The money was donated for the provision of Teleports to cancer charity CanTeen, allowing hospitalised children to attend school. Cheng was also recognised as one of Forbes' 30 Under 30 Asia in science and healthcare.

Anthony Bartl, a 36-year-old Teleport user who broke his spinal cord in a car accident at the age of six, said the technology had provided him with new opportunities.

“It’s a real thrill, finding a new ability. I could go through a museum in America, or wherever; see polar bears in the Arctic,” he said.

“You know, people with disabilities acquiring new abilities.  I never really got anything to move before with my brain, so that was pretty unbelievable in that sense.”