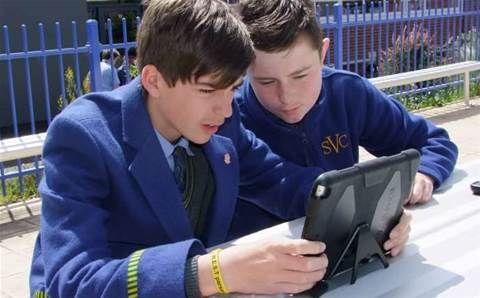 IBM has revealed Tasmanian school St Virgil's College as the first publicised example in the world of its Apple mobility push.

Big Blue has deployed 550 iPads and 900 licences for Fiberlink MaaS360 Mobile Device Management software to cover both the new and existing tablets at the northern Hobart boys' school.

A spokesperson for IBM told CRN that the devices rolled out were the iPad Air wi-fi model. At current retail value, the new hardware alone is valued between $275,000 and $303,000.

IBM declined to announce the total value of the project, but stated that the new tablets were deployed at the start of the current academic year.

St Virgil's principal, Damian Messer, said: "In our classrooms today, iPads are used in nearly every lesson to support learning and enhance educational outcomes. Whether it be filming and analysing performance in Physical Education or using an app to translate Shakespearean English to common English, teachers now rely on iPads to enhance and enable what they do in the classrooms."

The IBM spokesperson confirmed that St Virgil's is the first global case study publicised the IBM-Apple partnership. IBM shook hands with Apple last July to become a reseller, ISV and integrator of iPads and iPhones for the non-consumer market.

One reason St Virgil's selected IBM was for its MobileFirst for iOS apps range, developed in partnership with Apple. The iPads would also make it easier for students and staff to use internal systems - to aid attendance tracking, behaviour logging and browsing the college intranet.

St Virgil's has both primary and secondary year pupils, and will use the MDM's "group management features in order to monitor anything deemed inappropriate and control device settings as appropriate to each student's age".

The college reduced its upfront cost burden by funding the work through IBM Global Financing.

"While education institutions like ours do not have an enterprise-level budget, the number of devices we have to manage on a day-to-day basis is quite significant. When it comes to purchasing iPads for the next two years, we found IBM and IBM Global Financing to be very competitive," said Messer.