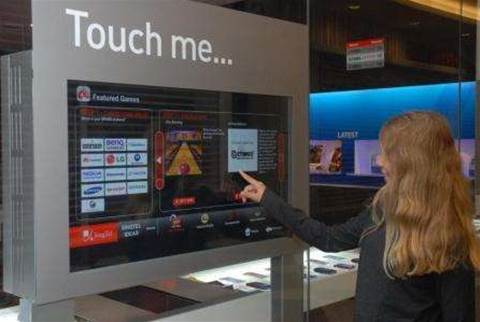 The Brisbane born company won the tender for the Singapore Telecommunications giant's first concept store to create an audio visual and multimedia shopping experience for its customers in October last year.

Yeahpoint custom designed interactive digital screens embedded in the store's counter tops, to create a café style shopping experience, to the store's glass walls which are accessible from outside the store allowing customers to buy products after the store has closed

After a three month trial  SingTel agreed to a second concept store featuring the Australian designed interactive product opening in Singapore last month (April) with more in the future.

"There are incredible possibilities for continuous evolution of our product," he said.

"The key is our unique YeahWare platform which we developed and is a world first in how it caters for reliable, rapid delivery of interactive self service solutions and enables simple and continuous evolution of the applications and content in store.

"There was nothing on the market that suited our requirements so we developed our own platform and haven't looked back since."

Anderson said the other key factor in Yeahpoint's success is that they design, install and maintain all their solutions for their clients.

"This sets us apart from our competitors," he said.

"We are very proud of what we have achieved and look forward to working further with SingTel."

The concept stores include five multi-media zones which SingTel says will make it stand out from its competitors and create a unique shopping experience allowing customers to purchase anything from a mobile phone to movies, music or ringtones for phone, all by touching a screen inside or outside of the store at any time of the day.

Shane Da Silva vice president of consumer sales SingTel said it believes it is setting an unprecedented standard across the entire retail industry for others to emulate.

"Yeahpoint has been an invaluable partner to work with. Their team worked hard right through to the end to deliver an innovative and truly impressive solution," he said.

Yeahpoint has been growing its company since its launch in 2003 with offices opening in April in Asia and New Zealand and South Africa. Anderson says there are plans for the company to expand further overseas.

"We are currently in negotiation with a number of leading companies in both Europe and the US who are looking at our product as a way of moving forwards in a tough retail market," he said.

"We expect to be making significant inroads into these other countries in the very near future. Customers want a new modern way of shopping and not just in regular hours.

"We can help the retailer provide this. It's a win, win situation for all concerned," he added.