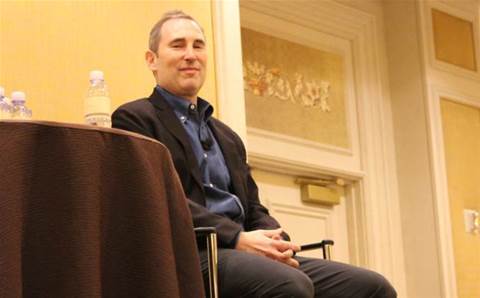 Amazon Web Services chief executive Andy Jassy, during an interview with his own chief marketing officer, Ariel Kelman, said Amazon's partnership with VMware would eliminate a "binary decision" that customers shouldn't have to make.

Asked by Kelman during their "fireside chat" if hybrid cloud is still important to AWS customers, Jassy replied: "the quick answer is yes."

A few years ago, the debate was private versus public, Jassy told attendees of the AWS Summit event in San Francisco. "We don’t really see that debate very often anymore," he said.

Most companies now are "pretty substantially" moving in the direction of public providers like AWS, Jassy said. At the same time, most companies will also operate hybrid environments for the next several years, he added.

"Many enterprise customers want to run data centres they're not ready to retire yet as seamlessly as they can alongside AWS," Jassy said. "Those customers shouldn't be forced to make a binary decision."

But "the vast majority of the world is virtualised on top of VMware," he said, and the failure to cooperate between the two companies had, in the past, forced just such a decision.

That changed a few months ago, when, after some "deep conversations," AWS and VMware finally joined forces to make it easy for enterprises to use VMware tools on top of AWS.

The joint offering, VMware Cloud on AWS, in which VMware will support and manage, and its partners will bring to market, vSphere environments running on dedicated Amazon infrastructure, is in a "large private beta and preview happening right now," Jassy said.

"We will allow customers to run in the mode they want to run."

After that discussion around moving legacy environments into the cloud, Kelman asked if providers like AWS were condemning their customers to the same lock-in challenges that were common with traditional IT.

It's "a question we get a lot," Jassy said, "and Oracle has sure made people care about that issue."

But Jassy denied public cloud was another platform that locked-in users.

"When you look at the cloud, it really is nothing like being locked into something like Oracle," Jassy told attendees, again taking a swipe at the software giant.

Cloud environments are more similar to each other than those of "old software services that have created this phobia," he said. And a prevalence of APIs makes it much easier to move workloads from one cloud to another.

Most organisations, however, don’t split their workloads evenly across clouds for a few other reasons.

For starters, a multi-cloud strategy forces them to "standardise along the lowest-common-denominator," Jassy said. That means they have to "tie the hands of their developers behind their backs in the name of splitting across multiple clouds."

Enterprises also don’t want to force their development teams to learn multiple platforms, Jassy said, which is "a pain in the butt."

"Shifting from on-premises to cloud is hard enough, but then to have to force teams to get good at two or three platforms is something teams don’t relish."

Finally, a multi-cloud strategy effectively diminishes the customers purchasing power, given the volume discounts offered by all the major providers.