AWS launches Chime to compete with Microsoft Skype and Cisco 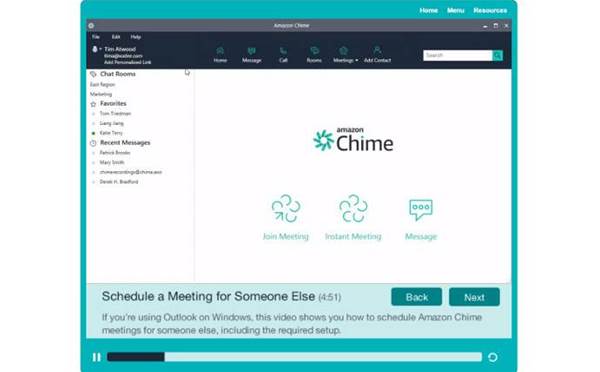 Amazon Web Services has announced Chime, the cloud giant's own unified communications service that works across desktops, iOS and Android devices to compete with the likes of Microsoft's Skype and Cisco's WebEx and Spark.

Amazon Chime uses noise-cancelling wideband audio and clear HD video that works across all devices and many conference room video systems with no upgrades required.

It marks a further foray up the software stack for AWS, which began its life offering infrastructure-as-a-service but had since expanded into a broad array of applications, including complex analytics, database services and its WorkSpaces desktop-as-a-service.

AWS claims most meeting solutions on the market are "disappointing".

"They're clunky and hard to use, the video is grainy and disconnects frequently, the audio quality is poor, there's constant background noise and it's impossible to know who's causing it, they require long PINs to enter and join a call, and have second-rate mobile features and apps."

Chime calls participants when it is time for the meeting to start, allowing them to join with a single click, with the option of "running late" button. Users are able to visualise who has joined, who is running late, and who can't make it to the meeting - the vendor said it is "the end of who just joined?".

Chime was built for mobile and offers Android, iOS, Mac and Windows apps. Amazon Chime also keeps meetings and chats synchronised across devices, and users can easily switch devices even in the middle of a meeting. During meetings, users can share their screens instantly. For ongoing collaboration outside of meetings, Amazon Chime offers chat rooms that allow people to work together in a single place, securely storing chat history and files for ongoing reference.

AWS vice president enterprise applications at AWS Gene Farrell said: "It's pretty hard to find people who actually like the technology they use for meetings today. Most meeting applications or services are hard to use, deliver bad audio and video, require constant switching between multiple tools to do everything they want, and are way too expensive."

The service will soon be available to US through APN partners from the second half of 2017.

Amazon Chime is available in three versions Amazon Chime Basic Edition, a free version where users can attend meetings, call another person using voice or video, and use Amazon

Chime's messaging and chat capabilities. Amazon Chime Plus Edition adds user management, such as the ability to manage an entire e-mail domain, disable accounts or configure active directory, as well as 1GB per user of message retention, all for US$2.50 per user, per month.

Amazon Chime Pro Edition adds the ability to host meetings with screen sharing and video for up to 100 users and also includes support for mobile, laptop, and in-room video along with unlimited VoIP support, all for US$15 per user, per month.

In August 2016, Google launched Google Duo, pitting it directly against Apple's FaceTime, which allows video calls only between Apple devices. Duo will also compete with Microsoft's video-calling app Skype, Facebook's Messenger and even its own Hangout app.

Slack has alsso launched a new product for big companies the Slack Enterprise Grid, which is set up for companies with hundreds of thousands of employees and strict compliance requirements.