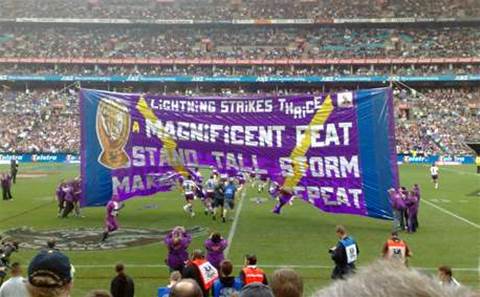 Australian AWS partner DiUS is involved in a data analysis project with the NRL's Melbourne Storm that is touted by the club as a first in Australian sport.

The Sydney and Melbourne firm is implementing an AWS-hosted analytics project, which will be used to analyse patterns in spending by Melbourne Storm fans at Melbourne’s AAMI Park stadium.

The project will use data provided by the introduction of a smartcard from Vix Technology for Melbourne Storm members this year. The NRL club’s members can opt to receive the smartcards that they can then use for access to Melbourne’s AAMI Park stadium, as well as to pay for drinks, food and merchandise at the game.

The goal will be to eventually give the club the ability to analyse patterns in spending by fans at games. Melbourne Storm claims the project is “the first of its kind in Australian sport”.

After a pilot in 2014, the smartcard is being offered to Melbourne Storm members for the 2015 season. Meanwhile, DiUS is working on the AWS implementation.

Vix Ticketing is an Australian-founded company that has supplied bus and rail smartcard ticketing around the world, including initial development of Hong Kong’s Octopus system, Singapore EzLink, Beijing ACC and the Melbourne Metcard. Other companies involved in the project include US firm Badgeville, Telstra, Janrain and NCR.

Vix’s SmartSite solution has been used in the mining sector, and is now being pitched by the company as a “foundation for a cashless stadium”.

Melbourne Storm is pitching the technology to members as a way to earn rewards. In April, it announced its Lightning Rewards program, which allows members to earn the rankings of “NRL rookie” to “Immortal” based on the amount of points they earn.

Rewards include merchandise discounts, signed memorabilia and an opportunity to travel with the team. Participants earn points by buying food, drink and merchandise at games, or by other methods, including engaging with the Storm’s social media accounts or by turning up 30 minutes early to the stadium.

DiUS senior consultant and namesake of Storm and Australian captain, Cameron Smith, said it will be possible to show how purchasing changes depending on the scoreline - data that can be used by marketers who can send incentives to members via an iPhone app or by text message. Marketers will see a map of the stadium showing where and money is being spent.

DiUS will make this possible by sending the data to AWS for visualisation and analysis. The project uses Amazon’s Kinesis, which is designed for processing large data records in “real time”, and Amazon Redshift data warehouse, while data streams are captured in Amazon S3 for later retrieval.

Grow your software revenue by selling these 5 affordable, essential tools for the modern workplace
By William Maher
May 27 2015
7:20AM