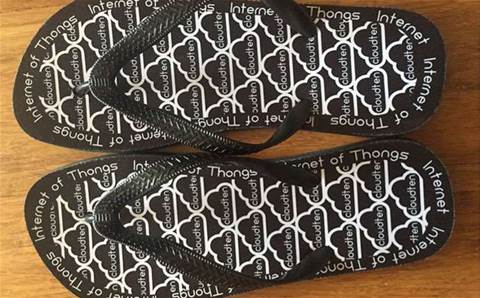 The 'internet of thongs’ device comes on the back of Cloudten’s work with clients, leveraging the AWS IoT platform, which is now being generally available in selected regions.

Principal cloud architect Malcolm Duncanson said: “With the advent of wearables and connected clothing we thought introducing the world to the intelligent flip flop might be a good idea.”

“The humble thong or flip-flop outside of Australia, (not to be confused with the other type of thong) is an enduring beach icon and one which we hold dear being confirmed Sydney-siders.”

Cloudten’s research arm has developed the Cloudten thong with tracking-technology built in. The thongs send data to AWS’s IoT service in Tokyo, where it is populated into a Dynamo DB database and analysed by AWS’s Lambda service.

The company is giving away 150 pairs of IoT-enabled thongs at the AWS Summit in Sydney on 27-28 April.

CRN and iTnews are exclusive media partners of the 2016 AWS Summit. Make sure to drop by our stand at the conference, which takes place on 27-28 April at the Horden Pavilion in Sydney. The AWS Partner Summit is on 26 April at the Sofitel Wentworth.