Behind the Milan Industries-DWM Solutions merger 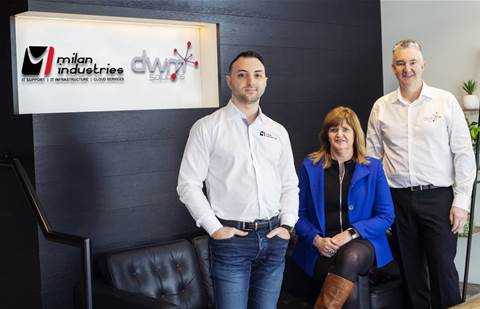 The IT channel has been a hotbed for consolidation over the past few years, like some larger global integrators and ASX-listed firms snapping up boutique MSPs, as well as smaller-scale mergers between longtime partners and collaborators.

One of those deals are the merger of Melbourne-based MSPs Milan Industries and DWM Solutions, who officially brought their businesses together in August last year after years of working closely together.

The merger brought together a firm of 30 staff, including directors Milan Rajkovic, Nick Clift and Jenni Clift, all spread out across seven offices across Australia.

Nick Clift, who led DWM (Don’t Worry Mate) Solutions with wife Jenni since founding the company in 2002, said the merger had been in the works for years, pre-dating DWM’s move to Melbourne in 2017 from Echuca in regional Victoria.

“The original idea of us coming together was rooted in our regional presence and a largely government customer base, while Milan Industries had more of a commercial and metropolitan Melbourne-based client base,” Clift said.

“That has really worked well together for us as we’ve been able to bring different skills to each other's customers.”

Rajkovic, who founded Milan Industries as a high school student in 2004, said the merger meant he could focus on his strengths.

“I’m more of a person that wants to take care of all the backend work, dealing with large technical delivery problems or working on very large, holistic solutions for clients. I’m more of your typical nerd, you can say,” he said.

“With Nick [Clift], it worked out perfectly that he loves talking to people and dealing with clients, and that was one of the first things that attracted me to the merger.”

Rajkovic added that the cross skill between the two teams has been beneficial, plus now having a presence for the whole state of Victoria allows them to bundle a complete telephony solution on top of providing connectivity to the last mile and desktop support.

“By having the extra resources, the extra flexibility to deliver larger and more holistic solutions has been well received - we’re basically delivering services that we couldn’t deliver before the merger,” he added.

Speaking on his new role, Clift said he now looks after the group’s larger customers and negotiating with vendors, while also working with Milan on the company’s vision and direction.

“We’ve had a couple of situations where Milan and I had to play ‘Good Cop, Bad Cop’, and also reap the benefits of having two sets of owners,” he added. “That's worked really well because sometimes people just do develop an attitude or and it's worked well, because we've been able to step in and use each other's skills to solve the problem.”

The merger was also announced in the midst of the 2020 COVID-19 pandemic, with Melbourne in particular facing a second wave and the reimposition of restrictions at the time.

DWM director and general manager Jenni Clift said both teams had been “incredibly resilient” during the whole merger process.

“Doing a merger in the middle of a pandemic is just bringing more chaos and uncertainty into a very uncertain and chaotic world,” she said.

“When the announcement was made, some staff had the usual fears of whether they can keep their jobs or what shirt they were going to wear and these sort of things, but in the end it turned out great. We’ve got a bigger team with new skills and resources so I say ‘bring it on!’”

Clift added that she was told the merger actually came at an ideal time, because there already was uncertainty and chaos and that nobody would really notice that little bit extra chaos resulting from the merger.

Looking ahead, the combined company will look to take advantage of its newly acquired resources and let their staff become specialists instead of having to do multiple jobs.

“Over the next 12 months, we’ll be doing a lot of upskilling, including specialisation training in different vendor products and skills,” Rajkovic said. “We're also doing an ISO 27001 accreditation process, which is the first major certification we're going to do.”

“As a smaller company, we didn't have the resources to be able to dedicate to doing some of the accreditation. [Getting the certification] is especially important because in five years time, I honestly believe if you don't have the basics of security, accreditation, you won't have a business.”