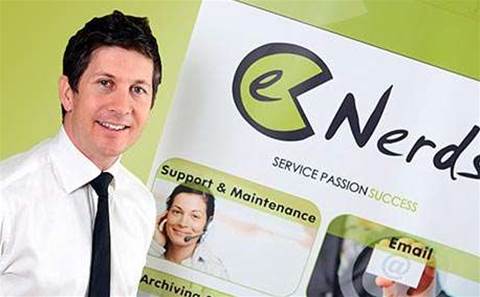 Managed service provider eNerds is on its way to becoming a vendor in its own right with plans to commercialise its in-house software.

The Sydney-based company has set up an offshore network operations centre (NOC) in Sri Lanka to help accelerate development of its Nerd Suite of products, covering reporting, 24x7 monitoring and management, support, ticketing and client portals.

The company, which was named four years in a row to the CRN Fast50, started setting up the Sri Lankan operation last year and is on track to have 10 staff overseas alongside 25 here in Australia.

Its head office is in Sydney, as well as support offices in Melbourne and Brisbane.

Whereas offshore development is not new, such as ASX-listed integrator Oakton's growing Hyderabad operations, it's a big move for a small MSP, said Jamie Warner, chief executive of eNerds.

Warner told CRN that the endeavour was not for the faint hearted. He revealed that eNerds spent $100,000-$200,000 from its cashflow to establish the offshore operation.

"You can't set up a NOC the way have done it without a significant investment," he said.

The project was driven by eNerds' desire to build its own managed service tools, "bucking the industry norm to use ConnectWise or AutoTask", said Warner.

"It’s a huge risk to build your own systems and I’m sure we’re an extremely small percentage of MSPs doing that.

The approach is paying off. "Our support panel, Nerd Panel, has increased our capacity by 15-20 percent, calculated by the reduction in calls that come through the the business."

This has allowed eNerds to onboard more customers.

The company set up its Sri Lankan base because it needed "greater capacity to support our internal development team in Australia and continue our innovation development with the view to commercialising one of the products later this year".

Warner said a new company would emerge later this year. "It won't be under our brand name. It will be a separate company with its own mission and vision; a technology company will emerge from a services-based business."

He added that all face-to-face and phone interactions would be with eNerds' Australian-based staff.

Nerd Suite plugs into Kaseya, and has been developed to collect data from systems such as Symantec, StorageCraft, Dell and Microsoft Exchange.