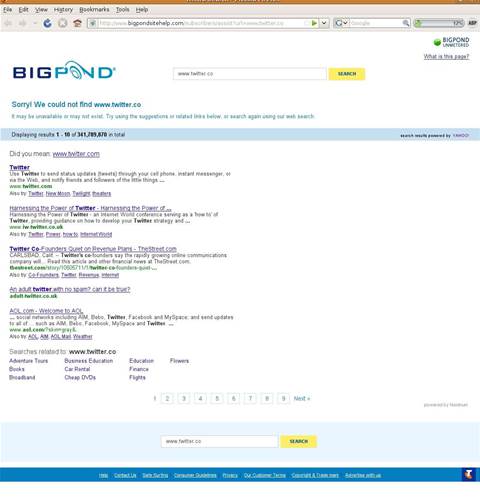 Telstra has already rolled out this system for BigPond broadband customers in Queensland with other states to follow by mid-December. Optus had adopted a similar strategy last month, much to the ire of some of its subscribers.

In an email sent to customers, Telstra emphasised the convenience of the new service.

"BigPond Broadband customers from today will experience less keyboard anguish with our new DNS redirection application. Typos can happen at any time. It's frustrating when you get an MS Internet Explorer Live Search page with suggestions from a mistyped URL. It's even more annoying when you get an unfriendly "404" page error message," the letter said. 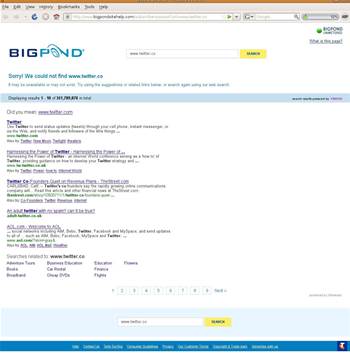 "As a tech person it didn't really faze me - when I hit the wrong URL and saw a fat BigPond/Telstra logo my first thought was 'typical'," he said. "To their credit they haven't covered the first page with advertising like other ISPs have done - but as soon as you click one of the links on a page I'm sure somebody makes some money.

"This opens the door for hijacking and other issues, which are already present in any ISP, but made more possible by introducing third-party software to intercept DNS requests."

Telstra also allows users to opt out of the redirection service, he added.

Matt Moor, Senior Architect at hosting company Bulletproof Networks believes the redirection system is "unethical" and "contravenes the spirit of the DNS system".

"If you posted a letter at your local post office, but got the address wrong, would you expect the postal service to send you back a load of advertising, and no clear indication of what went wrong? It is important for users to see an error message - not advertising - so that they can realise and correct their mistake.

"We host DNS records for all our major clients and would not even contemplate this sort of unethical and technically improper behaviour."

However, Brett Fenton, Chief Operating Officer at domain name and hosting company Netregistry, warns against hyperbolic claims that Telstra's change could break the domain name system. Because it only affects BigPond customers, it is not comparable to 'wildcard' redirects, which affect all domain name requests under a particular domain such as .com or .net, he said.

"People have this perception of DNS being a shared public resource - they don't like the fact that one company had the ability to abuse that to their own ends," he said. "But the ISP is providing users access to their DNS servers as a paid service and saying, 'If it's a failed lookup, we want to present you with more information'.

"The tech guys are always going to be pretty vocal about that, saying they're not following the rules. Any break in convention or standard protocols, the techies will jump up and down about it. They're generally the people who resist any change towards commercialisation of the internet.

"But for the Joe Average user, if a failed DNS resolution was giving them search results in Google, most people would see that as useful, not a negative thing."

Telstra BigPond did not respond to our request for comment.

What do you think of Telstra's 404 error strategy? Is it in the right spirit of the Internet? Comment below...

Grow your software revenue by selling these 5 affordable, essential tools for the modern workplace
By Josh Mehlman
Nov 20 2009
12:00AM