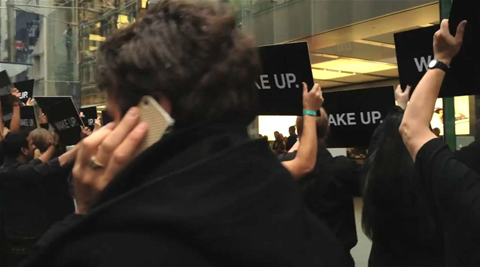 Canadian jewel Research in Motion (RIM) has unveiled its long-awaited BlackBerry 10 operating system, supporting its launch by doling out "Alpha" phones that can’t yet make calls.

The company flagged plans in March to give away prototypes of the device to BlackBerry 10 developers in the hope of fostering interest in its lagging platform. RIM said at the time the preview device would be different to the hardware it will actually deliver.

RIM released that preview today at its annual conference in Orlando, Florida, in conjunction with the operating system launch it hopes will lure developers to build applications for it.

The biggest omission is the prototype's inability to actually make calls, the New York Times reports.

Neither can it access wireless networks, highlighting how far behind RIM has fallen in an aggressive smartphone market, dominated by Samsung hardware, Apple’s integrated iOS device and software, and Google’s Android platform.

RIM’s vice president Alec Saunders conceded its Alpha hardware was “a little bit pokey” but claimed improvements were in the pipeline. But even they depended on software optimisation “that has not been done yet”.

The company intends to launch the completed device “in the latter part of 2012”.

The 4.2 inch screen is larger than the iPhone 4S but smaller than Samsung’s Galaxy Note, however a RIM spokesperson told the NYT the device it handed out on Tuesday “is not indicative of what the hardware will look like at launch.”

The Alpha launch follows an admission by the company’s Australian arm that it was behind an anti-Apple “Wake Up” flash mob who were transported in a black bus to Apple’s George Street, Sydney store, to execute the strange campaign.

It was initially suspected that Samsung was behind the prank, however RIM called on its outsourced Australian PR company to deliver the admission.

“We can confirm that the Australian ‘Wake Up’ campaign, which involves a series of experiential activities taking place across Sydney and Melbourne, was created by RIM Australia. A reveal will take place on May 7th that will aim to provoke conversation on what ‘being in business’ means to Australians,” a Spectrum Communications spokesperson told Mactalk.com.au.

Grabbing the hybrid cloud opportunity with Lenovo and Azure Services
By Liam Tung
May 2 2012
7:27AM