BlackBerry brass to be grilled at annual meeting 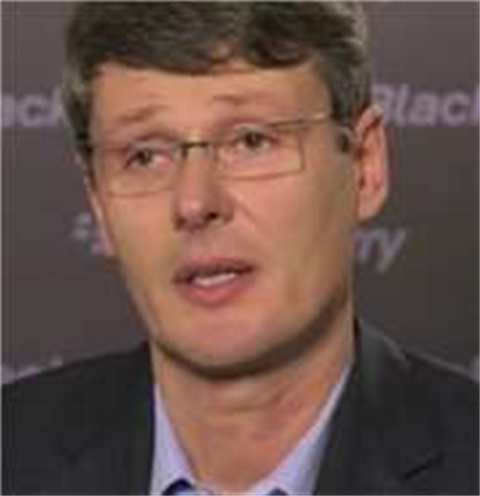 BlackBerry will likely face tough questions about its future at its annual meeting on Tuesday after dismal quarterly results last week triggered a 28 percent plunge in the Canadian smartphone maker's share price.

Sales of BlackBerry's make-or-break new line of smartphones in the quarter ended June 1 came in well below analysts' expectations and offered little evidence that the company can quickly win back market share from Apple's iPhone, Samsung's Galaxy devices, and other phones powered by Google's Android operating system.

"The results were a quasi death knell for BlackBerry," said John Goldsmith, the deputy head of equities at Montrusco Bolton, which owns more than 1.5 million BlackBerry shares. "The share move last week was very violent. I think you are going to get people standing up and making their voices heard at the AGM."

BlackBerry has forecast another operating loss for the current quarter, but chief executive Thorsten Heins said the company is on the right track and just needs more time.

"This is a year of investment. We have managed our cash carefully and prudently, and we now have the funds to invest, so this is the 'create the future' year," Heins told Reuters.

Some investors say BlackBerry must now look at all its options, from a sale of the whole company to a sale of parts. Its valuable patent portfolio and high-margin services business could draw interest from technology companies, according to bankers and investors.

Interest from private equity is seen to be weak, however, and some investors said they fear that BlackBerry will only lose more value if it keeps posting losses, burning through cash and bleeding subscribers.

"I think the pieces were worth more than the whole a year or two ago, but that's becoming less of a convincing argument and I am not sure it is true," said one fund manager, whose firm is one of BlackBerry's top 20 shareholders. The manager declined to be identified, citing to his firm's policy.

Ottawa reviews any big takeover of a Canadian company for competitive and national security reasons. Government officials have often said they want BlackBerry to succeed as a Canadian company, but concede they do not know how things will play out.

Given the uncertainty about its turnaround prospects, a foreign bid for BlackBerry could be palatable to Canadian regulators, some shareholders say.

Heins said BlackBerry is determined to stick to its strategy, and will unveil more devices that run on its new BlackBerry 10 operating system over the next eight months.

A source close to BlackBerry said the sharp drop in the company's share price could trigger pressure on the board to re-examine its options, in spite of reluctance to do a deal.

"It is the board's job to deal with this objectively, and we hope they would be objective enough to do the best thing for the shareholders," said Don Yacktman of Yacktman Asset Management, another top 20 investor in BlackBerry, with 5.8 million shares, according to Thomson Reuters data.

Many investors say BlackBerry's new devices are impressive, but they fear the company lacks the wherewithal for a drawn-out fight against Apple and Samsung.

BlackBerry also competes against Microsoft to be the No. 3 platform in the smartphone market.

"The problem here is they are facing Goliaths like Apple and Samsung, forget about the other Android devices. With a research and development budget that is a fraction of that of those two companies, how on earth can they compete?" Goldsmith said.

"I love fairy tale endings as much as the next person, but this is David versus two Goliaths, so good luck."