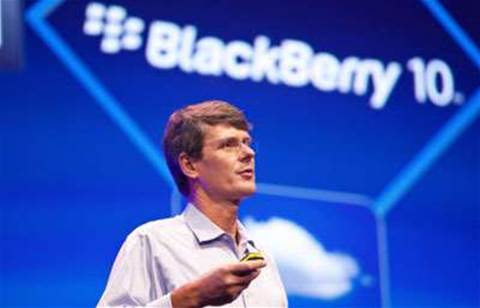 The US$934 million "Z10 Inventory Charge" - which is reduced to US$666 million after taxes - was "primarily attributable to BlackBerry Z10 devices", the company said.

"We are very disappointed with our operational and financial results this quarter and have announced a series of major changes to address the competitive hardware environment and our cost structure," said Thorsten Heins, president and CEO of BlackBerry.

"We understand how some of the activities we are going through create uncertainty, but we remain a financially strong company with $2.6 billion in cash and no debt," he said.

Blackberry said 49% of its revenue for the quarter was from hardware. Most of that revenue was from BlackBerry 7 devices, as while BlackBerry 10 devices started shipping in earnest during the quarter, they aren't counted until they've sold through to end customers.

All in, the company said it sold 5.9 million BlackBerry smartphones in the quarter, but some were counted shipments in the first quarter, so revenue for only 3.7 million units was actually counted in these results.

"While our company goes through the necessary changes to create the best business model for our hardware business, we continue to see confidence from our customers through the increasing penetration of BES 10, where we now have more than 25,000 commercial and test servers installed to date, up from 19,000 in July 2013," he said.

BlackBerry earlier this week announced a deal with investors Fairfax Financial to take the company private, and analysts believe it's possible BES could be spun off.

[Related: The bid to save BlackBerry]

Ben Wood, CCS Insight analyst, said it's unlikely BlackBerry will be able to continue to make hardware, but that BES could be a key enterprise product as the bring your own device (BYOD) trend continues.

"This trend of BYOD is an epidemic inside companies right now, and you need someway to manage those devices right now," he said. "That could be a nice little business."