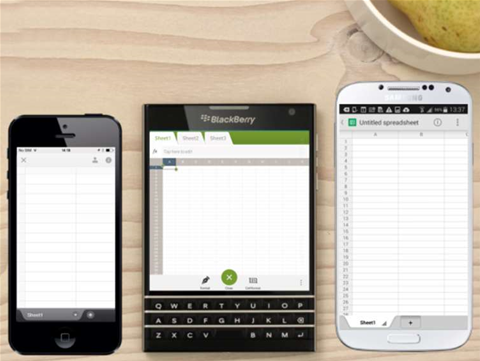 Spreadsheet jockeys rejoice: BlackBerry has designed its Passport smartphone to be square to make it easier to crunch numbers and do other work on go.

The BlackBerry Passport was briefly revealed last month by CEO John Chen last month. With a 4.5in square HD display, it's either a small phablet or unwieldy smartphone.

The business mobile phone maker claimed the square display will make it easier to view spreadsheets and other documents.

"Based on academic typology, the optimal number of characters on a line in a book is 66 characters (current rectangular smartphones show approx. 40 characters and BlackBerry will show 60 characters)," the company claimed in a post on the BlackBerry blog. "BlackBerry Passport offers its size and aspect ratio to accommodate these characters, making it the ideal device for reading eBooks, viewing documents and browsing the web."

While we're not convinced a smartphone needs to be square to accommodate easy reading - books aren't, after all - BlackBerry fairly points out that creativity in smartphone design is "dead". It said "device companies have been emulating the same, entertainment-driven look for so long that there’s been a homogenisation of the visual cues in smartphone design".

There's a good reason for that: it's certainly easier to fit a rectangular device in a pocket, and having consistent aspect ratios can make life simpler for app developers. Indeed, what may be more intriguing than the square shape is BlackBerry's decision to include a full Qwerty keyboard.

The BlackBerry Passport is expected to launch in September - we'll have to wait until then to see if the future of smartphones really is square.

Eliminating departmental friction within MSPs
By Nicole Kobie
Jul 9 2014
7:22AM