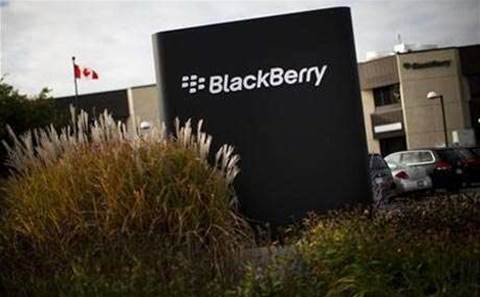 BlackBerry recorded a third-quarter loss of US$4.4 billion (A$4.9 billion) in its first quarterly report following a management shakeup, US$1 billion investment from Fairfax Financial Holdings and a new five-year partnership with Foxconn.

The ailing smartphone maker reported US$1.2 billion in revenue in its third quarter, down 56 percent from US$2.7 billion the prior year.

"We have accomplished a lot in the past 45 days but still have significant work ahead of us as we target improved financial performance next year," new CEO John Chen said in a statement.

Chen said he is pinning BlackBerry's future on handsets for emerging markets along with bolstering its enterprise services, messaging and automobile-related QNX cloud services.

Sales may be bolstered as privacy concerns over secure messaging in the wake of National Security Agency surveillance news drive public and private interest in encrypted eavesdrop-proof communications, some partners believe.

"BlackBerry is still in the game," said James Hawkins, president and CEO of US-based RedHawk IT Solutions.

"They are their own worst enemy when it comes to handsets, but BlackBerry's underlying technology is solid and it is still a go-to provider of secure phone and messaging solutions. For government agencies that I do business with, BlackBerry is still very relevant."

Jack Gold, principal analyst with J.Gold Associates, saiid the company still had a way to go to achieve turnaround.

"The new management restructuring will likely help, but the primary challenge is to stem the losses in devices and get more people interested in the higher-end devices, which is not happening at the current time," Gold said in a statement.

BlackBerry sold 4.3 million handsets in the third quarter. The company has been plagued by withering sales of its handsets - earlier this year it reported it had US$1 billion in unsold Z10 smartphones along with excess inventory of keyboard-equipped Q series phones.

The primary focus of BlackBerry's deal with Foxconn, according to the company, will be creating a 3G BB10 smartphone for Indonesia and "other fast-growing markets." The Foxconn device likely will launch in March or April, Chen said.