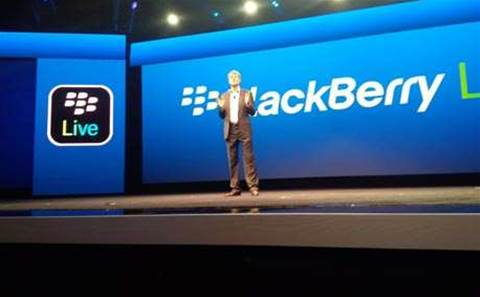 BlackBerry reported up to $995 million (A$1.05 billion) in losses for its fiscal second quarter on Friday and said it is laying off 4,500 employees. The beleaguered phone maker also said it will reduce operating costs by another 50 percent by 2015.
The company has reportedly hired PricewaterhouseCoopers to evaluate the company for potential sale, according to Bloomberg. BlackBerry, with 12,700 employees, has struggled to find success as its market share has rapidly eroded over the years, losing ground to Apple, Google and Microsoft handsets.
"You either innovate or you die; that's how the industry works. That's what we're seeing play out with BlackBerry now," said Chris Antlitz, an analyst at Technology Business Research.
In a statement, in advance of a scheduled quarterly earnings report next week, BlackBerry said Friday the company would "refocus on enterprise and prosumer market, offering end-to-end solutions, including hardware, software and services."
This was supposed to be a good week for BlackBerry. It announced Thursday that this weekend it will release BBM messaging service to rivals Apple and Android-based smartphones in a move to generate revenue on its technology. Earlier this week BlackBerry released a slick Z30 smartphone with a 5-inch display.
"I think they just made a total disaster out of the brand and out of the technology," said Jeff Kagan, an independent technology analyst. "The problem is the new technology missed and that's because they never understood what made them successful to begin with."
Last week it was reported that BlackBerry was prepping to layoff nearly 40 percent of its staff.
"I think the layoffs are quite steep and aggressive... Once you start cutting that many people, it really starts to interfere with your ability to get anything done in the organization," said Antlitz. "It lends further support behind the idea that they really need to make a move now. They're getting desperate."
BlackBerry gave additional investor guidance on Friday and said its revenue for the second quarter of was approximately $1.6 billion. It reported dismal sales of approximately 3.7 million BlackBerry phones in the second quarter. By comparison, iPhone sales are expected to top 8 million this weekend as Apple introduces its 5C and 5S handsets.
"The numbers are terrible. That's the bottom line. I hadn't expected it to be that bad," said Jack Gold, a technology industry analyst with J Gold Associates.
According to IDC, Microsoft overtook BlackBerry in May, claiming third place in the 2013 smartphone shipment race. During the first quarter of 2013, Windows Phone devices accounted for 3.2 percent of all smartphones shipped around the world, whereas BlackBerry devices made up 2.9 percent of the market share.
David Felton, president of Canaan Technology, a BlackBerry partner in Norwalk, Conn., said his BlackBerry business has plummeted recently. Felton doesn't believe BlackBerry's decline is about the company having inferior products; instead, he said, the company needs better branding and marketing to match what Apple and Android smartphone makers are doing.
"BlackBerry doesn't have a technology problem. They have a brand problem," he said.
Analysts said that going forward BlackBerry only has a few options: get acquired, go private, corner a niche market or suddenly come forward with a game-changing technology. Although the news now makes BlackBerry an unappealing buy for investors, Technology Business Research's Antlitz said that the data encryption patents that BlackBerry holds, which he estimated to be worth $1billion to $2 billion, could be the key to their value in an acquisition.
"This is a patent story for BlackBerry. They are losing money. There is no light at end of the tunnel," Antlitz said. "It could be a game changer if someone like Microsoft gets hold of those patents and differentiates themselves in the enterprise space."
Felton also said he hopes BlackBerry is able to go private instead of being acquired by a larger vendor. "If they went private and had enough capital, then they could make it," he said.
BlackBerry's shares fell 23 percent to $8.10 on Nasdaq, an all-time low point for 2013.
This article originally appeared on CRN.com
Got a news tip for our journalists? Share it with us anonymously here.

Grow your software revenue by selling these 5 affordable, essential tools for the modern workplace
By Staff Writers
Sep 23 2013
8:44AM