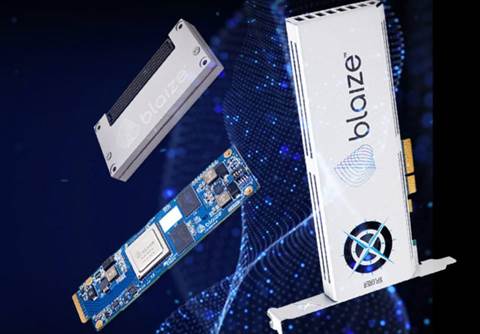 Artificial intelligence chip startup Blaize is taking on Intel, Nvidia and other players in the semiconductor industry with a slate of upcoming hardware accelerators that it says can provide up to 60 times better system-level efficiency than CPU and GPU solutions.

The El Dorado, Calif.-based company announced on Thursday that its Xplorer Accelerator cards for industrial PCs and edge servers, as well as its Pathfinder P1600 embedded modules, are sampling with customers now and are expected to enter full production in the fourth quarter this year.

The new products are based on the company’s Graph Streaming Processors architecture, which features 16 GSP cores and 16 tera operations per second, or TOPs, of AI inference performance within a 7-watt power envelope. With this, Blaize said it can provide up to 60 times better system-level efficiency over GPUs and CPUs for edge AI applications while also enabling 50 times less memory bandwidth and 10 times lower latency. The architecture is also fully programmable and supports multi-threading and streaming.

Dinakar Munagala, Blaize‘s co-founder and CEO who previously worked on Intel’s graphics microarchitecture for 12 years, said in a briefing that edge AI computing needs requires a different hardware approach from the architectural level because legacy solutions like CPUs and GPUs were initially built for different purposes.

There‘s also a strong need for architecture that addresses the edge’s unique efficiency and latency requirements and can actually function as a real product working in the field, he added.

“The advantage that we had was that we started with a clean sheet of paper and we built everything from the ground up — from the architecture, to chips, to boards and software tools — to make an efficient AI edge computer,” Munagala said.

Blaize’s Xplorer lineup consists of two products. The first is the Xplorer X1600E, an EDSFF 1U “ruler” form factor card that will cost US$299 in volume orders and is designed to fit in industrial PCs and small 1U servers for small and power-constrained environments like convenience stores and industrial sites. The second is the Xplorer X1600P, a PCIe 3.0 accelerator card that costs US$999 in volume and can “easily replace a power-hungry desktop GPU” and provide 16 to 64 TOPs within an edge server.

The Pathfinder P1600 system-on-module, on the other hand, costs US$399 in volume and is meant for sensor and network devices at the edge.

Richard Terrill, Blaize‘s vice president of strategic business development, said the company plans to go to market with OEMs, system integrators, value-added resellers and independent software vendors, but details will be shared at a later date.

“We‘re in extended negotiations with a full range of them,” he said. ”Our goal is to make sure we have the proper infrastructure sales channel and logistics in place to support what we believe is going to be a very quick, very agile, very dynamic marketplace.”

Key to Blaize‘s efforts is its AI software suite, which consists of the Picasso software development kit and the no-code AI Studio visual interface for technical and non-technical users, respectively. Both tools use Blaize Netdeploy, which can improve accuracy and performance of algorithms at the edge.