Budget tries to get small business and families spending 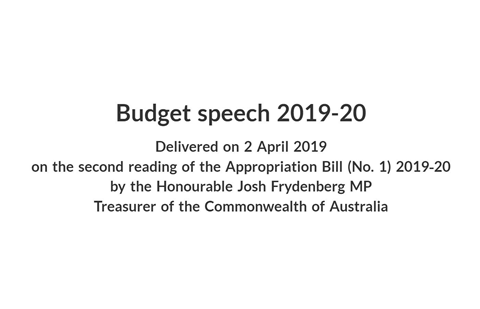 The Federal Budget has a few items of interest for channel businesses of all sizes.

Plenty of channel businesses are small businesses and the government’s big made a pitch for them with an expansion of the instant tax write-off program that lets buyers depreciate the entire cost of some assets in one financial year. As of July 1st the write-off will apply to businesses with revenue up to $50 million – a huge lift in the revenue ceiling from its previous level of $10 million that Treasurer Josh Frydenberg said will cover an additional 22,000 businesses. The program also now allows instant write-off of assets valued at up to $30,000, up from $25,000.

CRN imagines many resellers will not be shy about telling their customers they can now buy more technology with a more gentle impact on their balance sheets.

But resellers will have to get in a queue because new PCs or servers weren't suggested as the best way to use the measure. Instead the nation was told its good for "Allowing a café to get a new fridge or grill, a plumber to buy new tools or a courier a new van."

The government has also planned to chop company tax for small businesses to 25 percent, which will help channel businesses and their customers alike.

One measure that caught our eye as of interest to CRN readers is new $2.7m fund to help small business to resolve disputes with the ATO.

Our sibling publication iTnews attended the pre-budget lockup, analysed the spending plans, and pointed out the absence of an innovation agenda and the fact that the single-touch payroll scheme that small channel businesses must adopt by July 1st 2019 is expected to deliver $2.1 billion of savings to the government. So your work will help to pay for some budget spending!

Another item of interest to the channel – albeit one with a slow payoff – is more investment in developing STEM skills. A $525 million fund will in part be directed towards “areas of future high demand, including communications technology”, while a $3.4m fund will “encourage more women into science, technology, engineering and mathematics (STEM) education and careers.”

But the Budget contained new details of skilled migration programs, nor an extension of the Global Talent Scheme that aimed to bring tech talent to Australia.

Another budget measure will “enhance cyber security arrangements for whole-of-government systems in relation to the 2019 Federal election, and to mitigate potential cyber threats through enhanced monitoring and response capabilities.” This program “includes the creation of cyber ‘Sprint Teams’ within the Australian Cyber Security Centre and a Cyber Security Response Fund.”

But it wasn’t costed, for national security reasons – apparently we can’t have the rest of the world knowing how much we spend on security!

iTnews has also detailed several big ticket projects in Canberra that will have bigger channel players fingers’  twitching on tenders.gov.au. Among those projects are:

Will any of this happen?

Australia is due to go to the polls by the end of May and Parliament only sits for another couple of days before then. This means the likelihood the Budget will pass is low – there just aren’t enough sitting days to get it done.

So will the measures mentioned above may not make it into law, given that polls suggest the current government will be defeated?

The opposition Labor Party has agreed to the change to write-offs and company tax, and pledged deeper personal tax cuts. Most of the federal tech spend is necessary back office stuff and will almost certainly not change.

So the budget offers a pretty decent look at what’s on offer for the channel.

CRN will cover the opposition’s reply to the budget speech.

And next week we’re holding a roundtable lunch in Sydney to ponder the budget and the coming election. We’ve a couple more seats free for that. If you’d like to come, ping me at ssharwood@nextmedia.com.au.

And we’ve also created a budget poll, here, if you’d like to offer a quick reaction.

And if you really, really want to read the budget, it's here.