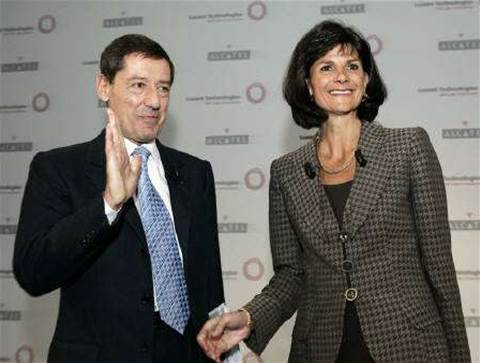 The move came despite some lawmakers' concerns about safeguards for classified work that Lucent's Bell Laboratories conducts for the US government. The companies have promised to create a separate unit run by Americans to handle sensitive US contracts.

"Alcatel and Lucent have agreed with US government agencies to enter into two robust and far-reaching agreements designed to ensure the protection of our national security," White House spokesman Tony Snow said in a statement released in Hanoi, where Bush is attending an economic summit.

He said those agreements were a strict condition for the administration's approval of the deal.

The combination would create one of the world's biggest suppliers of network hardware and software for mobile and high-speed Internet communications, with US$25 billion in annual revenue.

The Committee on Foreign Investment in the United States (CFIUS) spent 75 days investigating the national security implications of the transaction. The interagency panel recommended Bush approve it and he acted before the statutory deadline on Tuesday.

Representative Duncan Hunter, a California Republican and the outgoing chairman of the House Armed Services Committee, had questioned whether the classified work Lucent did for the government could be adequately protected with the safeguards announced.

Hunter had sought more information after a lengthy briefing by senior executives from the two companies as well as US Treasury Department and Pentagon officials. A spokesman for the lawmaker was not immediately available for comment.

During its 80-year history, Bell Labs pioneered work on technologies such as the UNIX computer operating system and the laser.

The companies said they welcomed clearing the final regulatory hurdle. "We are now working quickly to finalise the merger transaction, and expect to close the merger by 30 November," they said in a statement.

Lucent Chief Executive Officer Patricia Russo will serve as CEO of the newly combined company, which will be based in Paris. The companies have already received approval from shareholders as well as US and EU antitrust authorities.

The issue of foreign acquisitions of US-owned assets was pushed to the forefront during the past year after a Chinese state-controlled company, CNOOC, unsuccessfully tried to buy oil and gas company Unocal.

Additional uproar followed when the Arab firm Dubai Ports World tried to buy some operations at key U.S. ports. It later agreed to sell those assets to an American entity after complaints from many in Congress.

Lucent shares closed up one cent to US$2.62 on the New York Stock Exchange while Alcatel's US shares moved down eight cents to US$13.50 on the NYSE.

Eliminating departmental friction within MSPs
By Staff Writers
Nov 20 2006
9:48AM