Can the Motorola Atrix 4G change the face of smartphones? 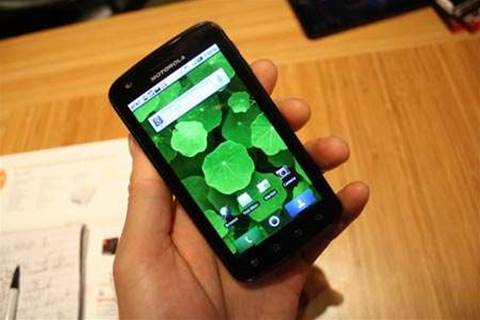 As far as I’m concerned, the standout gadget of the Consumer Electronics Show this year was the Motorola Atrix 4G - no small feat considering the sheer multitude of gadgets that were hawked. A geek’s wet dream of the ultimate mobile gadget meets the Transformers: a single, powerful device that can morph into other gadgets whenever the need arises. I haven’t been this excited about a gadget since, well, the original Apple iPhone.

First and foremost, the Motorola Atrix 4G is an Android smartphone. It runs the new(ish) Android 2.2, paired to a 1GHz Tegra 2 dual-core processor and 1GB of RAM, and throws in a bunch of other high-end features like a 4-inch qHD 540 x 960-pixel display (a resolution that’s almost as high as the iPhone 4’s Retina display, but with less pixel density due to the extra half inch in the display), 16GB of flash storage with microSD expansion up to 32GB, and an impossibly large 1930mAh battery.

Despite all these advanced features, the Atrix is remarkably compact, weighing only 135g and only marginally taller, wider and thicker than the iPhone 4. On its own, I’d be pumping my first in the air and cracking open the piggybank in anticipation of its launch, which local Motorola reps haven’t been able to confirm in terms of timeline (although it’s expected to launch in the United States in Q1 of this year).

But the smartphone itself is just the tip of the iceberg as far as the Atrix is concerned. The two docks that will be available for the Atrix will completely change the face of smartphone computing as we know it, and it’s especially impressive because a company other than Apple is the one that’s leading the charge. 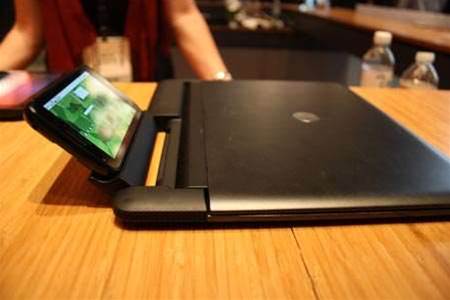 Future of smartphone computing? The Atrix 4G sitting in its Laptop Dock.

The HD Multimedia Dock transforms the Atrix into a high-definition media player for the TV and a desktop computer. In both cases, connecting the Atrix to a larger screen launches a separate Linux interface that’s custom designed for that medium. Hooked up to a HDTV, it displays a media player interface that you can navigate using the bundled infrared remote control, and any photos, music or movies stored on the Atrix (either in the internal 16GB storage or on a microSD card) can be played back in 1080p Full High Definition.

Even more impressive is using the HD Multimedia Dock to transform the Atrix into a desktop computer. The three USB ports and HDMI port can be used for hooking up an LCD monitor, keyboard, mouse and other peripherals (I’m thinking a 1TB external hard drive – yum!), and the Webtop desktop interface offers all the standard Linux amenities like the Firefox web browser with Flash support, a file manager, media player and email client. You can also launch the Android operating system in a separate window to access all of the Atrix’s phone functions and apps.

The laptop dock is no less impressive. It’s essentially the shell of a laptop with an 11.6-inch display, full-sized QWERTY keyboard, two USB ports and 8-hour battery life. The Atrix docks into the back, and as with the HD Multimedia Dock, this launches the Webtop desktop interface. For those that remember, it’s a concept very similar to the Palm Foleo, which never ended up launching – poor timing on Palm’s part, given the company was in dire straits at the time and ended up being bought by HP.

It will be interesting to see when the Atrix ends up launching, and whether it will come before or after the next iPhone. Whenever it does touch down, my money is ready and waiting.

Grabbing the hybrid cloud opportunity with Lenovo and Azure Services
By Jenneth Orantia
Jan 20 2011
8:56AM