Canalys: Whoever told resellers hardware was dead, they were wrong 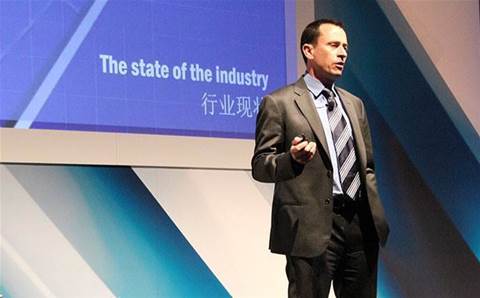 Reports of the death of IT hardware channel have been greatly exaggerated, with solid growth in PC sales in Asia-Pacific, according to Canalys president Steve Brazier.

Canalys expects a boom in edge computing, as local processing power increases at the fringes of the network to support the computing firepower in the cloud.

"The ability to process multiple data sources at high speed close to the source of the data will go up and up," said Brazier.

"We will see the emergence of micro-solutions that combine sensors, analytics and machine learning that are rugged, heat-resistant, water resistant and portable to create a new form of computing.

"It is being driven by increases in GPU and CPU, and solid state drives, which are just exploding in terms of capacity – up to 32 terabytes soon."

Brazier dubbed this edge infrastructure "micro clouds", and said their growth spelled good news for resellers."You will need to integrate them, manage them, secure them, maintain them and upgrade them."

The channel-focused analyst firm kicked off the APAC leg of its annual Canalys Channels Forum in Perth this week, the first time the regional event has been hosted in Australia.

Resellers have been told for years that they need to expand into services to bolster profitability, however, Brazier predicted that hardware would still contribute more than 50 percent of revenue for 90 percent of partners in 2020.

According to Canalys, APAC distributors grew 8 percent and partners grew 10 percent in the first half of 2017. The organisation expects channel partners in APAC to grow at least 10 percent per annum over the next three years.

"Obviously this varies a bit by country but your business plans need to be optimistic. If you are growing at less than this, you are missing out to your competitors. The channel is very strong, the results that we monitor are strong," he said.

Brazier also used his keynote address to point to a U-turn in PC shipments, which are growing in APAC – though not in Australia.

"Another surprising thing has happened – you are also doing well selling PCs. Whoever said the PC was dead two or three years ago was wrong.

"Commercial PCs are growing, and price points are going up because there has been a shortage of memory and component prices have gone up, but also because some people are also willing to pay more for well-designed notebooks that are thin, light and sexy.

"Prices are going up, that means margins are going up. Better segmentation of the market is helping, better marketing is helping and this is providing growth – it is a real bright spot."

PC shipments rose across much of APAC in the third quarter, according to Canalys market tracking data, including double-digit growth in Indonesia, Singapore and Vietnam.

"In terms of best performing major vendors in the region, HP and Apple are leading the way in growth, with a year-on-year increase of 12.3 percent and 11.7 percent, respectively," research analyst Ishan Dutt told CRN.

Shipments went backwards in Australia, however, with a year-on-year decline of 2.1 percent in Q3 2017. Canalys said a lot of the “smaller” vendors, such as Acer, Asus and Toshiba, had fallen away while HP and Dell saw small declines.

"Lenovo is picking up a lot of this slack, with 42.6 percent growth, while HP and Dell saw small declines," Dutt said. "Apple remains in a relatively healthy position with 4.5 percent."

Steven Kiernan attended the conference as a guest of Canalys.