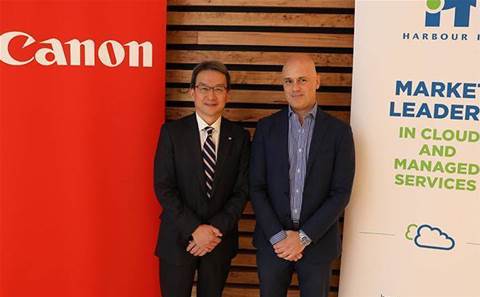 Canon Oceania has praised Harbour IT for "overachieving" in the last financial year, as the Japanese print and photography giant raised its stake in the Sydney-headquartered MSP to 100 percent.

It's the culmination of a deal first struck nearly three years ago, when Canon acquired a 51 percent share of Harbour in October 2014.

Harbour IT will continue to operate as a standalone entity led by its existing management team.

"It is business as usual for Harbour IT. Michael Giusti remains as the CEO for Harbour IT, and continues to be key member of the Canon Oceania senior leadership team," a Canon spokesperson told CRN.

"Sean Bishop remains in his current position of head of strategic vendors and alliances and is also taking on a senior sales capacity focused on strategic sales.

"Steve Evans, remains in his position of general manager, sales and professional services," the spokesperson said.

Previous chief executive Craig Bishop, who spent the past two years as a director, has retired from his position on the board.

The spokesperson lauded the success of the "multimillion-dollar" deal.

"Since 2014 we’ve seen significant growth of the Harbour IT business. Harbour IT has exceeded all of their targets and goals and has been a great addition to the Canon Group of companies.

"Harbour IT has been a key contributor to the overall success of the Canon Oceania Group. Harbour IT overachieved on all of their targets in 2016 and are set to have another great year in 2017," the spokesperson said.

The spokesperson pointed to customer wins as evidence of the merger's success, including data centre transformations, cloud migrations and hosting, managed IT services and a range of professional services projects, though would not name specific clients.

"With Harbour IT now part of Canon, Harbour IT has been able to acquire more mid-enterprise sized customers, the global backing of the company has contributed significantly to their success in the upper mid-market."

Some employees have relocated into shared office spaces and the company has just launched its third office location in the Philippines, co-branded under the Canon, Harbour IT and Converga names. Harbour will launch a new network operations centre at Canon HQ in Macquarie Park NSW later this year.

According to analyst firm Gartner, Australian print volumes have been falling at around 5 percent per year in Australia, and Canon is not alone among printing vendors in looking to M&A for growth amid a diminishing core market.

The deals have brought mixed results.

Fuji Xerox Australia attempted to build its own standalone enterprise IT division, but later backtracked on the plan amid a horrific year that has seen its executive ranks tumble amid an accounting scandal in Australia and New Zealand.

Ricoh and Lanier made dual acquisitions of, respectively, IMC Communications in 2012 and Inspire IT in 2013.