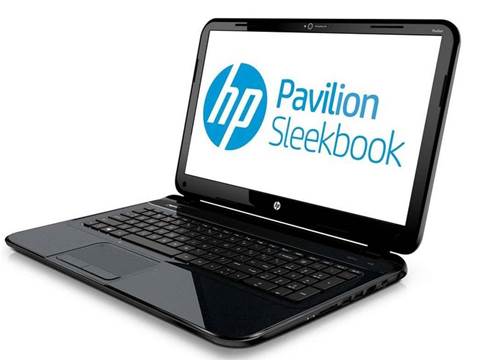 HP on Monday used the opening of CES to tout a series of products it described as "fresh, new offerings." But, as was the case last year, HP did not actually hawk its new wares on the CES show floor itself.

HP is continuing to push "sleekbooks", its lower-cost alternatives to ultrabooks that feature AMD processors and traditional hard drives.

The new Pavilion TouchSmart Sleekbook comes with an AMD "Trinity" A-Series accelerated processing unit (APU), a 15.6-inch high-definition touch-enabled display and optional AMD Radeon discrete graphics. It is slated to hit US store shelves on February 3 and is priced starting at $US650 ($A620).

[Related: HP Touts New 'Sleekbooks,' But Will They Confuse Customers?]

For Luddites that prefer a more traditional keyboard-oriented computing experience, HP is also offering a non-touch enabled Pavilion Sleekbook, which will be available in the US next week, priced from $480.

HP began using the term "sleekbook" last May and introduced its first Envy models running AMD CPUS in July. It debuted its Pavilion sleekbook line with Intel CPUs in October, and the two new models are the first Pavilions with AMD CPUs.

Deron Kershaw, a notebook analyst at Californian research firm Gap Intelligence, expects HP to continue offering Sleekbooks as more affordable alternatives to Ultrabooks. Despite potential confusion in the marketplace over the difference between the two, Kershaw believes sleekbooks are a distinct product category.

"Most consumers still aren't sure what an Ultrabook is, and Intel deserves the blame for that," Kershaw told CRN. "At least the term Sleekbook is somewhat self-explanatory, in that it's describing a thin, or 'sleek,' notebook."

AMD, incidentally, might dispute the notion of sleekbooks packing less of a performance punch than PCs running Intel processors. AMD is positioning Trinity APUs as cheaper and more powerful than Intel's i5 Core processors.

HP is also rolling out several new PC displays, including the Envy 27-inch IPS Monitor, which comes with built-in speakers and enhanced audio by way of collaboration with Beats by Dr. Dre. The IPS aspect, which stands for In-Plane Switching, allows the display panel to be tilted 178 degrees horizontally and vertically.

The Envy 27-inch IPS Monitor is priced at $US500 and will be available worldwide February 3.

IPS is also available in HP's new line of five LED backlit monitors, which range in size from 20 inches to 27 inches. They're expected to be available January 20 and are priced from $US129.99 to $US339.99.

Another new addition to HP's monitor lineup, the U160, is a portable model for business travelers featuring a 15.6-inch LED backlit display, collapsible design and connects to notebooks via USB. It's priced at $US139 and is expected to be available "later this month," HP said in a press release.

HP's ZR2330w IPS LED Backlit Monitor, a 23-inch model with VGA, DVI and DisplayPort inputs, is priced at $US259 and slated for availability at the end of January, according to HP.

Eliminating departmental friction within MSPs
By Kevin McLaughlin
Jan 9 2013
7:23AM